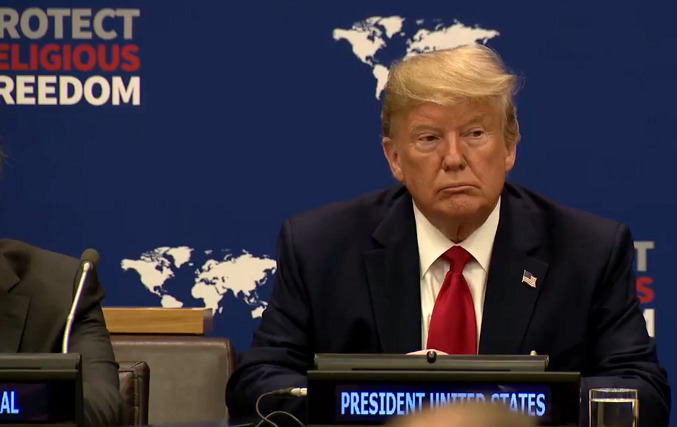 Trump led a conference under the title 'Protect Religious Freedom' in the UN on September 23rd 2019.

US president Donald Trump has called upon all nations to “join” the United States in the “urgent moral duty” of protecting the religious freedom. He said so in a conference he led on this matter at the United Nations summit where secretary general Antonio Guterres accompanied him.

Trump said the 1st amendment -which stands for freedom of belief and speech- makes clear “that our rights do not come from our government; they come from God”. He regretted “80% of the world’s population live in countries where religious liberty is threatened, restricted or even banned”.

The percentage he cites comes from a report from the Pew Research Center in 2016, where this independent think tank also mentions Muslims being targeted in the United States and directly links this to the current present president of the country:

“In the United States, Muslims were the targets of derogatory rhetoric and proposed discrimination. In July, Republican presidential nominee Donald J. Trump criticized the parents of a Muslim soldier who was killed in Iraq (…). Later in the year, President-elect Trump appeared to stand by plans for a temporary ban on Muslim immigration to the United States and a proposed requirement that U.S. Muslims register in a database”, the report summary reads.

>>> You may also read: Alicia and Aladdin, the beautiful love story of a Catholic and a Muslim<<<

But Donald Trump’s speech on religious freedom this Monday at the UN ignored his rethoric and measures against Muslims: “As we speak, Jews, Christians, Muslims, Buddhists, Hindus, Sikhs, Yazidis and many other people of faith are being jailed, sanctioned, tortured and even murdered, often at the hands of their own government, simply for expressing their deeply held religious beliefs. So hard to believe”.

He called upon all the countries of the world “to end religious persecution”, “repeal laws restricting freedom of religion and belief, protect the vulnerable, the defenceless and the oppressed”. The US president assured: “Protecting religious freedom is one of my highest priorities and always has been”.

“Repeal laws restricting freedom of religion and belief, protect the vulnerable, the defenceless and the oppressed”

What he did not mention was the “temporary ban” on Muslims he promised to implement if he became president and which finally has gotten a version of it for some Muslim majority countries plus Venezuela and North Korea after the judges declared his first travel ban illegal.

He recalled recent “evil attacks” against worshippers in sinagogues in the US, in mosques in New Zealand and churches in Sri Lanka and urged every nation “to increase the prosecution and punishment of crimes against religious communities”. “There cannot be greater crime than that”, he said.

>>> You may also read: Attacks against mosques are more usual than you might think: they are committed by anti-Muslim terrorists and also by groups like ISIS <<<

Trump announced a coalition of US businesses for the protection of “all faiths” in the workplace, although he did not go into detail. “True tolerance means respecting the right of all people to express their deeply held religious beliefs”, he pointed out before saying to the victims of religious persecution that the US “will always stay at your side”.

Last July Donald Trump held a short meeting with people who survived religious persecution worldwide. Sitting on his chair at the Oval Office and surrounded by them, he talked with them in front of the cameras (watch White House video).

The victims were grateful for the opportunity to be listened, like Farid Ahmed, a victim of the Christchurch attacks against Muslims who became known after publicly forgiving the terrorist. But there were also awkward moments during the meeting with Trump, such as when a Rohingya refugee asked him for solutions to go back home after being forced to flee to Bangladesh together with another 740,000 Muslims since 2017. “Where is that exactly?”, Trump asked. “Burma”, an official had to clarify (meaning the state nowadays known as Myanmar). Or like when he asked Nobel Peace Prize Nadia Murad why she obtained the award. She is a Yazidi woman survivor of ISIS genocide against this religious community who brought up attention worldwide about these mass killings, mainly in Iraq.

The law known as “Muslim ban” or “Travel ban” finally included countries which are not Muslim majority nations: North Korea and Venezuela. But it kept Syria, Libya, Yemen, Somalia and Iran among those with restrictions, including no travel at all for Syrians and North Korea people. Iraq and Sudan, which where among the countries in the first executive order, where finally dropped.