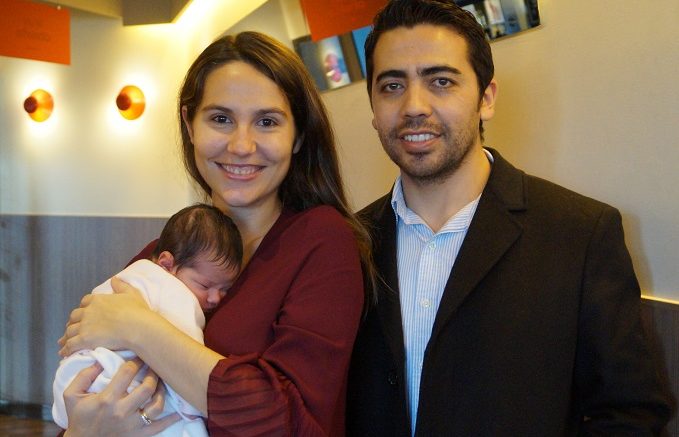 Alicia cannot stop smiling. Aladdin makes jokes and laughs. They have such an energy that nobody would say it has been only ten days since they became parents. Amelia sleeps peacefully next to her parents while they chat with Salam Plan in a cafe in Madrid on a cold January morning. They gladly share their love story for Valentine’s Day.

They will stay in the Spanish capital only for some weeks, due to the birth of the baby, as Alicia’s family lives there. But the couple’s home is in Luxembourg, where both work in the financial sector. When they met, did they think they would end up like this: married, with a daughter and living in the Grand Duchy? , the journalist asks. They look at each other and laugh. Their’s is a real story of love at first sight. Although the plan was to stay in Morocco, where they met and where Aladdin is from.

Alicia is from Madrid (Spain) and was in Casablanca (Morocco) finishing her master’s degree in banking and financial markets that she studied there. Her former professor Maite called her one day and asked whether she had something to do, recalls Alicia. Luckily enough, she did not have any plans for that evening, because otherwise she would not have been able to go to the dinner that her teacher organized that day with more alumni, and she would not have met Aladdin.

Alicia’s professor asked her whether she had something to do. Luckily enough, she did not, because otherwise she would not have met Aladdin

He was a student of the first class of that master’s degree she was completing six years later. As soon as they were introduced, the crush between each other began. Alicia’s smile conquered him… also her French accent, the language they share. She was fascinated by the serenity and maturity of a man who gave her good advice when she was lost about which traineeship to choose. “I advised her to stay in Morocco,” Aladdin laughs. He asked her phone number to Alicia and they started to go out together.

Almost four years later they continue laughing without stop, accomplices. Alicia López is now 29 years old and Aladdin Bennouna is 34. She is Catholic and he is Muslim.

When they were starting to know each other, Alicia remembers that she “liked to ask” things about Islam “to know where she was getting herself into”, because she was not an “expert” of her partner’s religion and did not trust things she found on the Internet.

Alicia’s smile conquered Aladdin… also her French accent. She was fascinated by the serenity and maturity of a man who gave her good advice when she was lost

“We gradually got to know each other on that aspect, too. Both are religions that can be complemented, that have points of convergence. I realized the important thing was what I felt for Aladdin, the values​ he has, which are very similar to mine. To be together, God willing, all your life, you need to find your soul mate and, look, it has been precisely with a person of another religion, from another country, but I am delighted, ” she says.

“Respect for the parents and family”, solidarity, not lying, God as a creator and protector… are some of the values cited by of them as their bond. They also share more mundane things, of course. They love to go to a good restaurant from time to time and enjoy travelling together. They recommend Peru and Chile, the destinations of their honeymoon.

“I realized the important thing was what I felt for Aladdin, the values​ he has, which are very similar to mine”

“I’m not gonna change you. I’m not going to force you to change to my religion, that’s not Islam either”

Aladdin had no doubts about the difference in religion. “No, because I’m not gonna change you. I’m not going to force you to change to my religion, that’s not Islam either, ” he explains. “I respect her religion a lot, when she prays at home or goes to church I go with her and there’s no problem.” At home everyone prays separately and Aladdin likes to see his wife “close to God”.

The marriage proposal was a traditional one, in the presence of both families. “The surprise effect came (before), when he asked me ‘what ring do you like the most?'” , laughs Alicia. Knowing why they were going to meet did not make the moment less emotional: “Aladdin gave a speech in front of everyone and we all ended up crying,” recalls his wife. And that despite the fact that he improvised what he said. 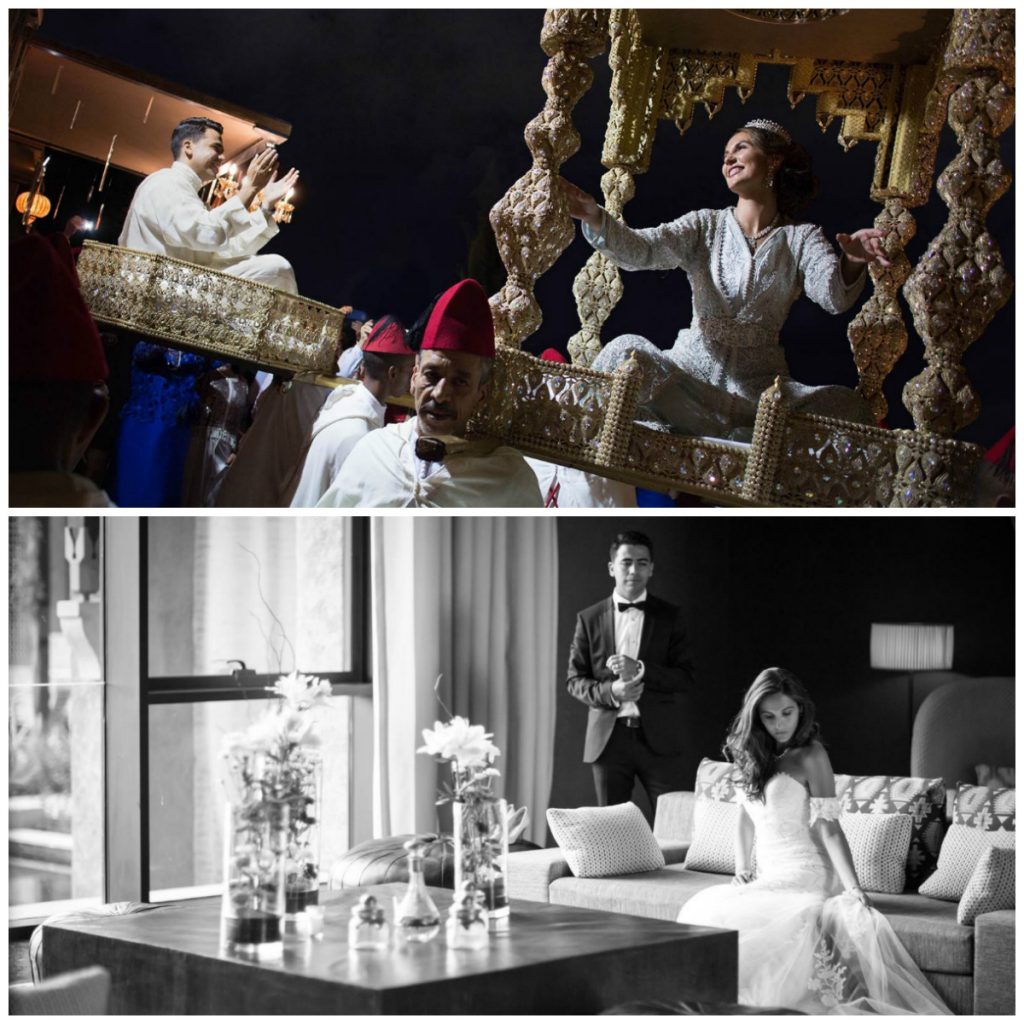 Alicia says that her parents have always granted her the power to make her own decisions and had no problem at all with the wedding. “My parents have been living a lot in Arab countries. My father (also) was assigned (as a diplomat) in Mauritania, Senegal, Morocco … I think that contributes a lot to open minds, ” she says.

Aladdin’s parents were also happy with the wedding. “And yes, look: there is a difference in religion, but in our religion you can marry a woman who believes in a ‘religion of heaven’, who is not an atheist or a Buddhist … Because in the Muslim religion you also have to believe [in a certain way] in the other religions, ” he explains.

“The mistake is to mix politics and religion. (And) of course migrants are to adapt to the laws of the country. Nor should these laws favour one religion over another”

They married in 2017. The civil wedding was in Spain, and the most festive part was in Morocco, sharing “the richness of Moroccan culture” with the guests, says Alicia.

She believes that hate speech coming from politicians such as those of the Spanish Vox party are mainly due to what she calls a “climate of instability” at the border areas of Morocco and Spain because of what she considers a mismanagement of illegal immigration. “The mistake is to mix politics and religion. (And) of course migrants are to adapt to the laws of the country. Nor should these laws favour one religion over another, ” Aladdin suggests.

He likes to speak to her baby-daughter about politics when he gets to sleep her, because singing is not his thing, he admits. “I tell her: ‘let’s see, what do you want to talk about’? Brexit? “, he laughs. “Sometimes she does not like it and we change the subject,” he continues laughing. Lullabies are left to the mother.

“Amelia is Muslim, but she will grow up in an environment where nobody will say: ‘This is not that way’. There will be an atmosphere of respect and understanding of the two religions”

Little Amelia is Muslim, something that her parents already had talked about when they decided to start a family. But Christmas and the Festival of Sacrifice will be celebrated in their house equally, because they belong to the traditions and cultures of his grandparents, her mother explains. “She will grow up in an international environment, where nobody will say: ‘This is not that way’. There will be an atmosphere of respect and understanding of the two religions,” says Alicia.

Amelia has not woken up during the entire interview, nor when her parents have taken her in their arms to appear with them on some pictures. She is quiet and calm, while her caring parents cannot help but doting lovingly on her. 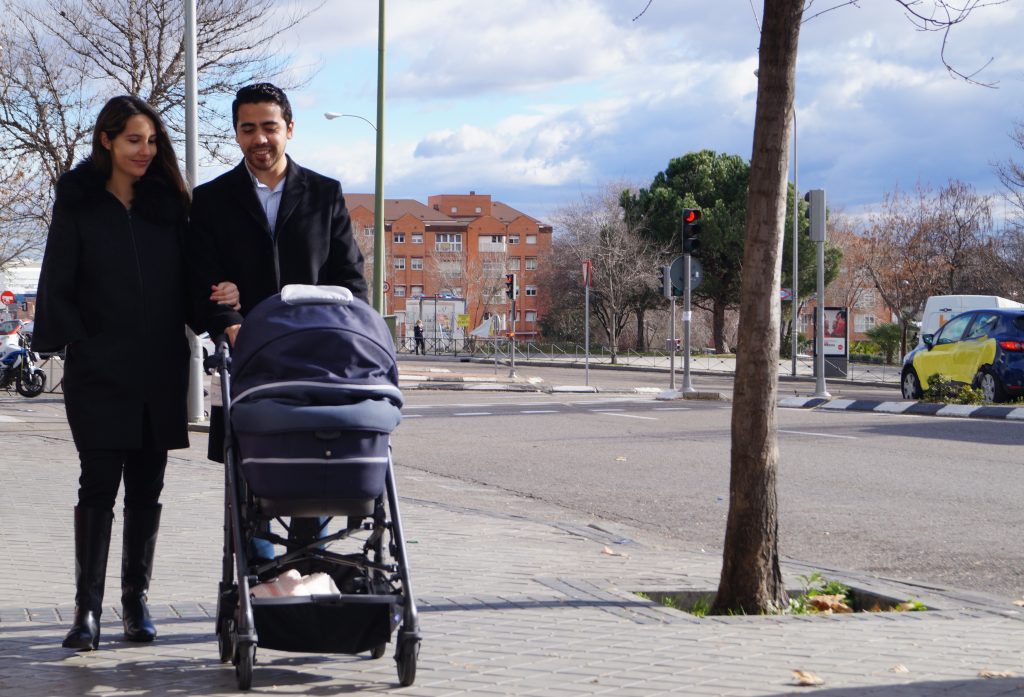 The happy couple goes for a walk with their baby in Madrid. © Salam Plan