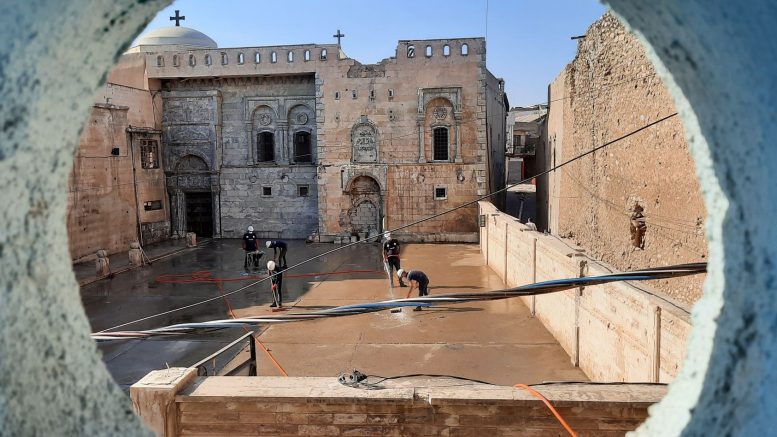 “We want to tell Christians that this is still their city, that they are welcome here”, Ziad says from Mosul (Iraq). He leads a group of volunteers who worked to restore the city’s oldest church. ISIS’ terrorists had destroyed it while they ruled over Mosul, the same way they destroyed its most significant mosque.

Muhammad almost lost his life one day when he walked on the street with a small mobile phone in his pocket. It was the time when Daesh (also known as ISIS) had instilled its terror regime in Mosul, the city which got to be the terrorists most important stronghold in Iraq. The terrorists ‘police’ shouted at him from the distance. Neither the “normal” trousers Muhammad was wearing nor the mobile phone which they had not discovered yet, were permitted. He panicked.

“I began banging on the houses’ walls. I was so in fear, I didn’t realize they were not doors. I couldn’t breathe. If they searched me and they found my mobile, they would kill me”

“I began banging on the houses’ walls. I was so in fear, I didn’t realize they were not doors. I couldn’t breathe. If they searched me and they found my mobile, they would kill me”, he remembers now on the other side of the phone line from Mosul. He started to cough so loud, that other people began to gather around him to try and help him. They offered him water. Given the crowd that had come together, ISIS guards left. “Those people saved my life”, he says convinced.

“We want Christians to come back”

Today Muhammad is one of Sawaed al Mosuliya volunteers (Arms of Mosul), an NGO which has restored Saint Thomas church in the heart of Mosul’s city centre. The took out the rubble, cleaned up and reinstalled the light.

The terrorists destroyed the church, as well as the famous Al Noori mosque. Saint Thomas served as prison during ISIS regime. Muhammad explains the Christian temple means a lot to Mosul’s people after the horror they had to endure: “During the liberation battles in Mosul, there was no running water. The only source of water was an old well inside the church. This church was a source of life”.

“During the liberation battles in Mosul, there was no running water. The only source of water was an old well inside the church. This church was a source of life”

“Since I was a child, Muslim and Christian families used to visit each other for the religious feasts, such as Christmas. There was a church where we used to go to. I miss that, I want those traditions to come back”, Muhammad adds.

As for Ziad, the volunteers’ coordinator, he recalls that before the terrorists took the city, he shared life with his neighbours and friends without caring about the religion of one another: “It wasn’t an issue. We didn’t even know who was Christian”. But now he knows 15 families on his street and wants to rebuild their houses to help them come back.

Why focusing on the houses of Christians, given that Daesh persecuted everyone, also Muslims? “Because tens of thousands of people who fled are coming back, but not even one Christian person who lived here has done the same”, he explains. Two of his best friends used to live in those houses and they call him almost every day to know how the situation is. “They want to come back, but they’re afraid”.

>>> You may also read: Three religions under the same roof: this is Berlin’s next revolution<<<

Their work restoring the historic Saint Thomas church, thanks to the financial support of USAID, was the first step to be able to use the temple again for a religious service. At the same time, it revealed a symbol of hope in the city being reborn. “When we published the pictures on internet, people from other parts of Mosul began asking where this church was. They wanted to visit it. Some of my Christian friends cried and thanked us”, Muhammad says.

“Since I was a child, Muslim and Christian families used to visit each other for the religious feasts, such as Christmas. There was a church where we used to go to. I miss that, I want those traditions to come back”

They had already planned an interreligious event in the church just before the coronavirus pandemic exploded, so it had to be postponed. Now there is a man from Erbil who goes from time to time sent by the Christian community of that city. He is finishing the electric work on the church. Ziad and Muhammad have seen how the neighbours of the area usually go to him to offer him some water or other kind of help.

The volunteers of Sawaed al Mosuliya were founded in June 2018, when they began cleaning up the rubble and rubbish of tens of houses. The founded a supermarket whose incomes go to the people in need. They also help orphans and take part in interreligious events hand in hand with Christians and Jazidis in favour of a peaceful together living. “We’re doing all we can so that everyone comes back. They’re all welcome”, Ziad underlines.

Bring back normality to defeat ISIS

When the terrorists took Mosul back in 2014, Ziad was doing his master, he had a shop and lived with his family. “Life was good. When Daesh arrived, their mission was to destroy life in the city and its residents. They forced me to flee to Turkey with my family. They took my house and my shop”.

Ziad estimates 25.000 homes were destroyed. Now he wants to “bring back normality as a way to defeat Daesh”. He got married one month ago, has a minimarket and his doing his PhD in Modern History at the Faculty of Education. He hopes to find a full-time job when he finishes his studies.

Muhammad had to close his mobile phone shop when Daesh arrived, and his Economics studies had to wat. Instead of graduating in 2015, when the terrorists dominated the city, he graduated in 2018. He stayed in the city, but his brothers -who worked in the media sector- had to flee to Europe and they have not seen each other since.

Both of them dream of a “stable and peaceful life” in their city. Together with other volunteers, they will go on cleaning up the rubble of war and the damage the terrorists left behind.

“We’re doing all we can so that everyone comes back. They’re all welcome”