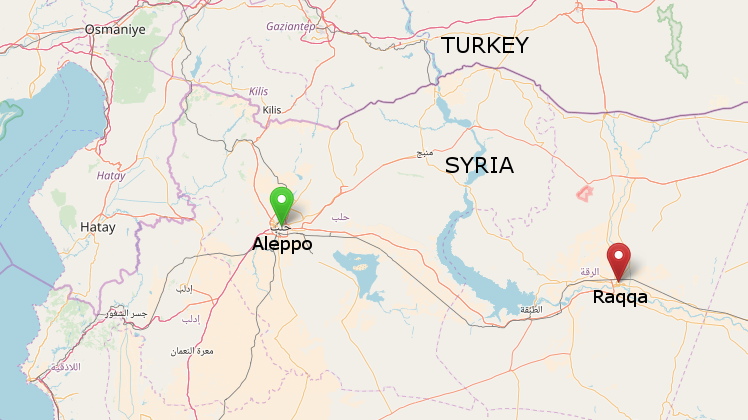 Raqqa is at the North of Syria, near Turkey. Copyright: Open Street Map

The loss of its last stronghold hinders the terrorist narrative of being a calling itself an “Islamic State”, but for some time now its territorial control had been already reducing and altering its strategy. Now the question in Raqqa is who will rebuild the city in the midst of the complex Syrian war.

Can we speak of a real takeover of Raqqa (Syria), which ISIS considers its capital? Colonel Ryan Dillon, a spokesman for the US-led coalition against the terrorist group, acknowledged on Tuesday that 10% of the city was yet to be “cleared”. Something similar happened in the case of the other main stronghold Daesh had in Mosul (Iraq): weeks passed since the Iraqi forces announced it had been “freed” until it was effectively cleared of the terrorists’ partial control.

In the present case, however, there are three important elements that make the difference in what the defeat of Daesh there will mean: the forces which have taken the control of the city, its geographic conditions and the cumulative effect of the strategic military losses of the group.

It is Kurdish militias -supported by the US- who have taken control of Raqqa in the middle of a Syrian war with many more open battle fields, while in the Iraqi Mosul it was the government forces that recovered the territory with the aim of rebuilding the country, as RUSI’s UK counter-terrorism expert, Raffaello Pantucci, points out.

“They (the terrorists) are completeley surrounded, so there is an inevitability that the group will eventually loose the territory. The problem is in Syria you’ve got a different array of groups: from Syrian Defence Forces [opposing Bashar al-Assad] to Kurdish forces to Syrian Government forces… a lot of people who’re fighting against ISIS, non of whom really work with each other and some of them are even fighting against each other. So the real question is who’s gonna step in and fill the space to rebuild the city?”, he tells Salam Plan.

The security and defense senior analyst at the Spanish Elcano Royal Institute, Félix Arteaga, agrees with the diagnosis and adds an essential difference in the practical and military aspect for the future of Raqqa and Daesh: the city is much smaller than Mosul in terms of size and population. In the case of Mosul, it was initially said that the number of besieged people were one million, but then it turned out to be less, he recalls. In Raqqa, initially the estimated inhabitants were initially 60,000, but the current number has been reduced to between 2,000 and 3,000 inhabitants, taking into account those who fled and those who died.

“Raqqa is smaller than Mosul (…). It will take some time not only to recognize that it is controlled, but also that it is open, which is the important thing: to remove at least all the landmines in the main entrances (to the city) and check every single house out. That will take a lot less (than in Mosul),”says Arteaga to this website. “ISIS has already strategically lost the city, (although) there are always sympathizers who might come back. It’s a city where they had quite a number of supporters”. Pantucci also warns of the difficulty of completely eradicating the presence of the Daesh in the city: “At the end of the day, it’s quite a confusing battlefield: you’re dealing with urban warfare, there’s people there who are melting back into the population and you’ve got lots of groups fighting over it”.

ISIS has already strategically lost the city, (although) there are always sympathizers who might come back. It’s a city where they had quite a number of supporters.

Arteaga believes that Assad, who has the support of Russia, Iran and more and more of Turkey, will eventually take control of Raqqa. Pantucci explains that the Kurdish militias have no interest in ruling the city, because it is neither Kurdish nor those groups have governing experience. The Western forces are also not likely to be in charge of rebuilding the Raqqa, since they intervene in Syria only from the air or by supporting third parties such as the Kurds. “It remains a very dangerous site”, RUSI expert sums up.

At the same time, Daesh’s terrorists and their chiefs continue their retreat towards the south of the once-called “capital” of their self-proclaimed caliphate. They are settling near the Iraqi border in sparsely populated areas, where other actors in the Syrian war have no special interest. Arteaga explains there they still have access to some oil, but their main source of funding – the tax system imposed on the inhabitants of the areas they dominate – no longer gives the income they were used to.

He recognizes that the control of territories once meant a “qualitative leap” for the terrorists and estimates that the actions Daesh has taken openly since 2014 in the region, now will have to go “underground, with low profile, (because) they are very marked in areas where they’ve lost material means, etc. Living at the expense of the population as they have done (until now) will be very complicated. ”

For this analyst, the loss of Raqqa hardly means changes for the Daesh when it comes to a practical point of view. In fact, he considers that the relevance of this defeat for the terrorist group would barely reach 5 on a scale of 1 to 10. “The importance is not the same now than what it would have meant a few years ago. It is already one loss after another (and) the organization is already in a dynamic to contain damages and restructure itself. They have known for some time that the fall of Raqqa is inevitable. They’ve been pulling troops to the southern border. Its loss has more a symbolic, moral meaning.” (Take a look at the map of the Institute for the Study of War (ISW) and Syria Direct).

Pantucci agrees: “Losing the ‘capital’ in Syria is embarrassing and definitely a demonstration that you’re losing the territory. But it’s not the end of the group, (which) will continue to evolve in a new direction”. He reminds that the terrorist group “has been around since the late 1990’s. I think what we’re going to see now is them going back to be a much smaller organization, rather than a ‘state-controlled’ entity”.

Losing the ‘capital’ in Syria is embarrassing and definitely a demonstration that you’re losing the territory. What we’re going to see now is them going back to be a much smaller organization, rather than a ‘state-controlled’ entity

Meanwhile, in ISIS affiliated groups in Egypt are also trying to impose their radical vision of jihad through laws in some places, according to some reports. Their particular presence in Libya, Afghanistan or scattered throughout Africa and Europe is not to be ignored either.

Is there more danger of attacks on European soil and other parts of the world after taking over Raqqa? Neither Pantucci nor Arteaga believe so. “It is always possible, but even if they win, too. When they were winning (on the battlefield), people went there (to join them). Now [since some time ago] the diaspora has reversed and increased risk in all scenarios,” says the Elcano expert. “They have a real basic (battlefield knowledge) wherever they go, which comes from the experience in Syria,” he adds. But the RUSI analyst recalls that most of the attacks committed so far on European soil by Daesh or sympathisers were perpetrated by terrorists who had not moved to the territory then controlled by the self-styled “Islamic State” Prior to their attack.

The chief of MI5 has said in an interview with the BBC that there are 3,000 extremists in the United Kingdom; “a number of whom” are former foreign fighters who returned from Syria and Iraq*. It is an example of the situation accross several European countries. But this does not mean that each one of them is ready or willing to kill, according to MI5 and Pantucci as well.

The end of Raqqa is an important step in Daesh’s accumulation of military and moral defeats, but more and more the voices of experts and governments agree that reducing the fight against terrorism to a security and military issue would be a mistake.

*Correction: Initially this report said “about 700” of the extremists in UK are returnees, but that is the approximate number of more than 800 British foreign fighters who went to join ISIS in Syria or Iraq and remain alive. We apologize for any inconvenience this error might have cause the reader.