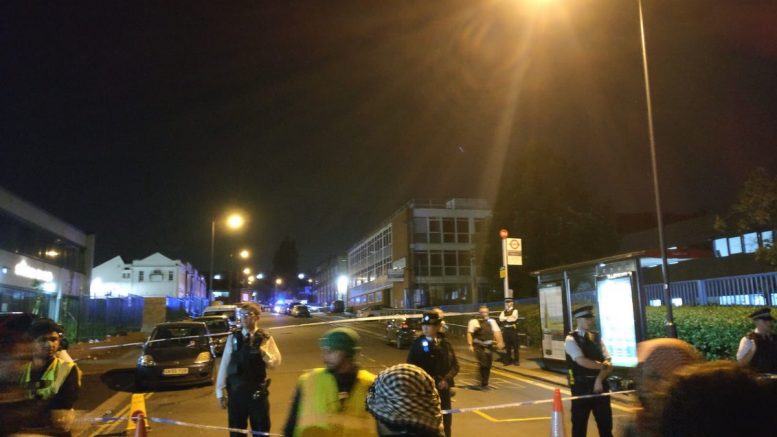 Area next to the Hussaini Association was rapidly cordoned off by police. © Twitter/ @zaidbenjamin

Police are looking into it as a hate crime due to reports of Islamophobic insults. Investigators do not treat it as terrorism because the alleged perpetrators were four occupants of the car who had been apparently whiling away at the spot before being asked to leave.

Three people have “minor injuries”, police said. One of them remains in hospital: a man in his fifties who is being treated for a serious leg injury.

The victims had been attending an evening programme at the islamic Hussaini Association in Cricklewood (North West London) last night. The car “mounted the pavement” and hit a “crowd of Muslims” while shouting “islamophobic insults“, the Association and Muslim Council of Britain have explained in different press releases. They were “indiscriminately mown down”, the Hussaini Association stated while adding it was “premeditated Islamophobic attack”.

“Promoting dialogue and understanding between the different communities and faiths in the UK” is precisely the “mission statement” of this non-profit organization. “We are in deep shock at such an attack taking place on our community but remain proud to live in a diverse and tolerant society and, as such, we remain unintimidated,” spokespersons for the Hussaini Association said.

The car -a red Nissan Juke, according to eyewitnesses cited by the Hussaini Association- and its occupants are being sought by police. No arrests have been made.

How it happened and why it is not treated as terrorism

“This incident is not being treated as terror related but the hate crime aspect of the collision is being looked at by detectives as an aggravating factor,” police explained in a statement. DS Kelly Schonhage from Brent CID said: “We are treating this incident very seriously and a number of enquiries are underway to trace the car and those involved. Enquiries into the full circumstances of the collision are ongoing.”

These are the circumstances investigators have established for now:

“Approximately at 00:20hrs security at the community centre were informed of occupants in a car behaving anti-socially, drinking and allegedly using drugs. The occupants of the car – three males and a woman all aged in their mid-twenties – were asked to leave the private car park.

>>> You may also read: The Swedish Christian activist who stands up for Muslims: “We share a lot of things and the same God”<<<

The car then drove near the centre and the occupants were involved in a confrontation with a large group of people visiting the centre. Words were exchanged and comments of an Islamophobic nature were allegedly made by the group in the car.

The car then reportedly sustained minor damage by some of those outside the centre. It proceeded to make off at speed colliding with three individuals as it left. The car and its occupants who failed to stop and injured three people are being sought by police”.

The Hussaini Association claims the consequences could have been much worse as a number of “volunteers bravely stood between the speeding vehicle and patrons heading home.” The Association thinks this “potentially saved the lives of dozens of innocent people”.

Tell Mama organization which works against islamophobia in the UK has tweeted: “Rest assured that we are monitoring this situation closely and working with the relevant agencies. We will provide updates in due course.”

The Islamic Human Rights Commission (IHRC) said in a statement the “anti Muslim hit and run attack highlights police indifference”. IHRC is calling on the police “to do more to protect Muslims from Islamophobic attacks outside their places of worship”.

** Since you are here … we want to ask you a small favor: share the work of Salam Plan so that more and more people get to know this journalism against hate, without propaganda, without sensationalism. Also, you can follow us on Twitter or Facebook. Pass it on. THANK YOU!