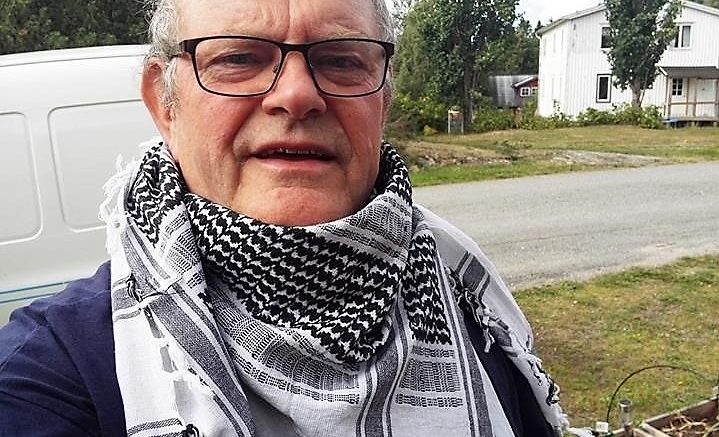 Stefan Lindquist thinks Christians and Muslims have much to learn from each other. © S. Lindquist

Stefan Lindquist has been working most of his life with asylum seekers and says he has met “thousands of Muslims”. His experience tells him it is the Sweden Democrats who are scary, not the Muslims citizens the far-right party wants to expel.

Lindquist is a Christian who has worked many years with asylum seekers and immigrants not only in Sweden but in countries like former Yugoslavia or -more recently- in Greece. Currently, he is district chairman of ViSK at Härnosand, a left-wing organization which works for the Swedish Church to become more progressive, according to his own explanations. But he is not a priest, as several foreign media introduced him when he got briefly famous last May.

He had written an ironic post about the “dangerous Muslims” on Facebook which went viral in Sweden. He told about Muslim acquaintances who helped him or others, like the one who offered him a lift while his car was on repair or the one who bought food for a friend who did not have enough money.

Now, he has answered Salam Plan’s questions ahead of the election day this 9th of Septembre, were the far-right and anti-Muslim Sweden Democrats are expected to get around 20% of the voters’ support, only behind de Social Democrats (now in power). Lindquist thinks Christians and Muslims have not only very much in common, but also “a lot to learn from each other”. He also assures in a conversation via e-mail that most Muslim refugees in Sweden -who arrived from war-torn countries like Iraq, Syria or Bosnia- are very grateful for the help received and eager to pay it back to the society.

The leader of Sweden Democrats claims Muslims cannot belong to your country – nor share Swedish values. The viral post you wrote last May shows your experience tells you something completely different. Could you tell us more about that?

I have heard the racist party Swedish Democrats and their supporters pronounce such thoughts, which are both wrong and scary. Then you can wonder what they mean by “Swedish values”. For me, Swedish values ​​include helping people to flee away from wars and countries ruled by harsh dictators; solidarity with vulnerable groups to which refugees belong.

I have been involved in work with new arrivals for about 40 years during different periods. I have also worked with aid organizations for many years, including in Romania under the dictator Nicolae Ceauşescu’s regime but also during the war in former Yugoslavia. In recent years, I have also worked with refugees in Greece, refugees who moved from many countries in war.

I have met thousands of Muslims, most of whom have a strong desire to adapt to the rules set by recipient countries as a requirement to live in the country. Most people I know have strong convictions, they do not lie to the Swedish state but want to study, work, earn money and pay back for the help they have received from Sweden. Many are extremely grateful for all the help they have received from Sweden.

“I have met thousands of Muslims, most of whom have a strong desire to adapt to the rules set by recipient countries as a requirement to live in them”

SD leader Jimmie Akesson has said Muslims in Sweden have built parallel societies. Is that true?

The fact that many new arrivals live in the same areas as their compatriots is probably to some extent true. My view is that it has always been so. When the immigrants came from Finland, many settled in the same residential areas, there were stores that specialized in Finnish food, etc. So it is no wonder that it is happening now as well.

Some also claim violence in a specific neighbourhood in Malmö has been caused by immigrants or refugees, like the ones SD wants to send back home. What do you think about that?

The media image is that violence is increasing in Sweden and especially in some residential areas in Malmö. (But) according to statistics from [the independent crime survey organization] BRÅ, for example, fatal violence has fallen in the region in which Malmö belongs. By 2017, 113 cases of fatal violence were found in Sweden, which is the highest level in the period 2002-2017. This is an increase of 7 cases compared to 2016.

It is difficult to get accurate figures on the proportion of violent violations carried out by new arrivals, but here too, I think the media would like to exaggerate the neo-nation’s share among violent violations. The statistics available are difficult to interprete due to the fact that they do not print which country they are from, but researchers who have gone through all crimes of 2016 claim that there is no overrepresentation of immigrants, but most people living in the Malmö are law-abiding citizens who work or go to school far from the criminal world.

[To check the data, you can visit the crime statistics website mentioned by Lindquist, which also includes Islamophobic crimes and Christianophobic ones, among other hate crimes].

“We have so much to learn from each other. I personally love much of the wisdom the Quran teaches”

What are the most important things that Christians and Muslims share, from your point of view?

We share a lot of things, we have the same GOD, and we also have so much to learn from each other. I personally love much of the wisdom the Quran teaches.

As a Muslim, you are responsible for the next 7 neighbours, you should help them. And, for example, if you grill, you should invite the next 7.

If you feel a person doesn’t have money, help him with food, clothes, with medicine and other things.

Do not use violence either against children or your wife.

What needs to be done in Sweden so that hate stops spreading across society?

We need to work much more on integration. We need to shorten processing times, increase the opportunity for new arrivals to quickly get out to work and gain self-sufficiency, but also to resolve the clusters that exist throughout society. People must be able to live a decent life without having to commit crimes to cope with their lifelihoods. We have to build homes where people can afford to live, ordinary cheap appartment rents that allow everyone to live.