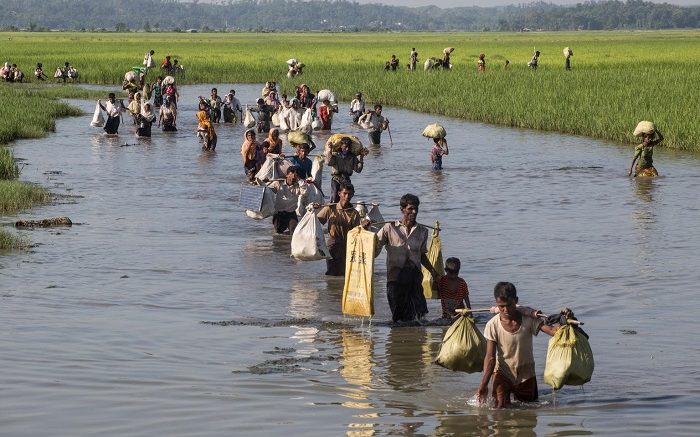 More than 12,000 children from the Rohingya Muslim minority arrive every week in Bangladesh fleeing violence against them in neighboring Myanmar. But managing to cross the border is not a life insurance for them, NGOs warn.

Since a wave of violence against Rohingyas erupted less than two months ago, 320,000 children have arrived in Bangladesh, making up 60% of this Muslim minority refugees, according to Unicef. More than 2 out of 10 of them suffer malnutrition and 145,000 under the age of 5 are “on the verge” of suffering it, according to these organizations. In addition, every week there are 12,000 more children arriving.

More than 2 out of 10 children are malnourished and 145,000 children under 5 are “on the verge of suffering” malnutrition

“On the way we saw a lot of dead people dead, their heads and limbs chopped off”, said one of those affected to the BBC while getting into Bangladesh. The testimonies of other refugees collected by Save The Children indicate that their villages got completely burned, many people were killed and women raped while they fled.

Fatima was among those women. She left Myanmar with her three children after finding her husband dead in her village. “There have been times I have not been able to eat in three days because there is no food. My little son was about to die for lack of food”. Now she feels “happy” because she can finally cook something else than just lentils for her children.

Rohingya villages got completely burned, many people were killed and women raped while they fled. A third of this Muslim minority has already crossed into neighboring Bangladesh

The United Nations has described the Rohingya situation in Myanmar as “ethnic cleansing”, while Aung San Suu Kyi – the Nobel Peace Prize laureate and current de facto president of that country – is criticized for letting the army continue to perpetrate the attacks. The military continue to exercise much control in ancient Burma and it is estimated that one-third of the 1.2 million Rohingya Muslim people of Rakhine State in Myanmar has already crossed into Bangladesh.

“Many Rohingya refugee children in Bangladesh have witnessed atrocities in Myanmar that no child should ever see, and all of them have suffered tremendous losses”, Unicef ​​Executive Director Anthony Lake said in a statement. “These children urgently need food, clean water, sanitation, and vaccines to protect them from illnesses that arise in emergencies. But they also need help to overcome all what they have already suffered”.

In the report Outcast and desperate: Rohingya refugee children face a perilous future, Unicef ​​shows how the majority of the refugees live in improvised and overcrowded settlements, with risk of diseases and lack of means to help the refugees. The United Nations organization for children indicates that the Government of Bangladesh is endeavoring to welcome them, but more aid is needed.

“In more than 20 years of humanitarian work I have never seen people in such extreme situations, especially children”

Unicef ​​and Save The Children agree that the greatest dangers now for Rohingya refugee children are cholera and malnutrition. “We are seeing an alarming number of children arriving desperately hungry and malnourished. Then, in the camps, these children do not have any kind of hygiene, they live surrounded by dirt, contaminated water and depending on the food portion they receive to survive”, said Unni Krishnan, director of the Save The Children Emergency Unit.

This NGO estimates that some 281,000 people urgently need food assistance to avoid malnutrition; including the already mentioned 145,000 children under 5 and more than 50,000 pregnant and breastfeeding mothers. Children are “at serious risk of contracting diseases such as cholera, which for children like these can be fatal”, warns Krishnan. “In more than 20 years of humanitarian work I have never seen people in such extreme situations, especially children.”

Burmese law denies nationality to its Rohingya inhabitants, who have endured “repression and discrimination” for decades, Human Rights Watch said. 120,000 of them continue to be displaced within their own country due to waves of violence in 2012 and 2016.