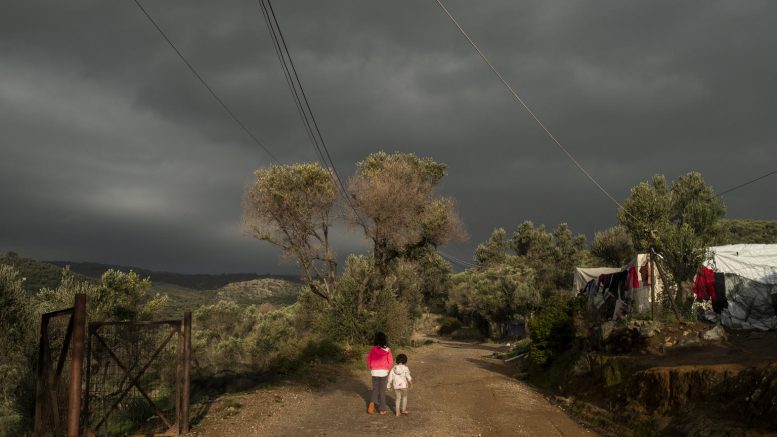 Refugees on the island of Lesvos (Greece), on December 2018. © Ron Haviv/ Unicef

She was trying to reach Greece with her family last week. The information about her is so scarce that even her name is not something we know for sure.

In 2015, the picture of little Aylan Kurdi dead on a Turkish beach went global. Last January 15th another small child passed away trying to cross the sea. She was 4 years old and it has hardly hit the news. She also left Turkey behind with her family in a boat and did not survive.

Data indicate that neither Aylan nor this Iraki girl are an exception. Only last weekend about 170 people lost their lifes in the Mediterranean. Some testimonies speak about children and a pregnant woman on-board, Unicef recalls.

The father of the girl, Mohammed Fadil, told back in Turkey that their boat with about 45 people on-board (among them several children) had to confront strong waves on their way to Greece. He assures Greek Coast Guard agents approached and told them to stop the engine. They seemed to want to tow the boat to a save place, but then they began to turn violently in circles. “It was inhumane, they tried to kill us,” a broken father denounced in a statement reflected by the Turkish public news agency Anadolu.

Other testimonies also registered by Anadolu speak about violent manoeuvres of the Greek Coast Guard and they accused Hellenic agents of putting their lifes at risk. They were rescued by the Turkish Coast Guard, near their coast. By then, Mohammed Fadil’s daughter was already dead, according to the news agency.

The Hellenic Coast Guard has responded to the accusations assuring on the morning of January 15th they detected a boat with a “considerable number of immigrants in Turkish territorial waters”. They say they informed Turkish authorities in accordance with the international law. A Greek boat and another one from Frontex attended the arrival of a Turkish coast guard vessel. Greek authorities assured they were not informed about a missing girl.

Fadil’s spouse and their other two children survived with him.

In 2016, the European Union signed a controversial treaty with Turkey to avoid more people arriving in search of asylum across to Greece. The 28 member states agreed to a 6,000 million Euros package for Ankara so it would stop the migrant flow and also to be able to give back those people who would still manage to reach Europe after the deal was signed.

During the first two weeks of 2019, more than 400 children have reached European coasts across the Mediterranean, an average of 29 per day. Unicef asks European governments to protect them urgently and to provide a regional “predictable” solution which offers safe harbours to which migrants may arrive quickly.

The UN agency for children’s protection, warns that “freezing temperatures and rough waters” in winter make the already dangerous journey through the Mediterranean even worse. That is the reason why it is especially important to avoid maintaining rescued people out at sea waiting for a safe harbour to open up for them.

Minors have to face “violations of their most basic rights during their dangerous journeys at sea as well as when they arrive in Europe,” according to Unicef.

At the beginning of this year, at least six children had to wait adrift on a Sea Watch NGO boat, as the vessel had no permission to enter any port in Europe. Children on-board were on a limbo, some of them as long as 18 days, without urgent medical attendance and other basic services until they could finally disembark, Unicef regrets.

About 23,000 children arrived through the sea to Greece, Italy and Spain in 2018. Most of them fled from war, extreme poverty and persecution, Unicef stated.

This UN agency asks European governments as well to ameliorate the attention children get when they arrive on land and asks for more compromise on terms of resettlement which prioritize the minors’ well-being and family reunifications.