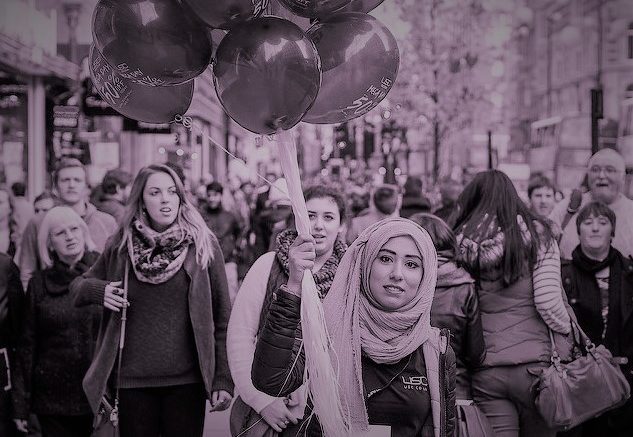 They also fight for women equality, but they assure that their struggle is twofold: they are forced to fight against stereotypes for being women and for being Muslim. Especially those who wear a headscarf.

Ramia Chaoui does not want to go alone to the demonstration of this International Women’s Day in her city, Barcelona (Spain). But not only because it is more pleasant to attend in good company, but because she knows that she will be exposed to contempt or worse by some non-Muslim women. This happened last year to other Muslims like her who took to the streets to demand equality for women.

This time they have organized themselves in advance to go together and create what Chaoui calls a “safe space”. “Among all the things that affect me as a woman, like the rest, I also want to claim my presence on the streets and my space and my place”, this insurance consultant and Youtuber, better known as Ramia Schannel on social media, explains.

“Feminism is not having one [unique] conception of being a woman but rather granting women the ability to be anything they want and to give them the opportunities to make the choices for themselves”, says the advocacy coordinator of the European Forum of Muslim Women based in Brussels, Hajar El Jahidi.

This Canadian-Morrocan woman makes clear that the situation described by Ramia Chaoui is not an exception: “There are feminist groups that often forget or exclude minority groups such as women of color or religious minorities.” Jahidi assures that “we are impacted by gender inequality the same way as other women”, in addition to facing discrimination because of their faith.

“The feminist movement in Greece has tried to impose another oppression, telling us what we should do and what not”

Anna Stamou is director of an export and import company in Athens. She is also the marketing director of the Muslim Association of Greece. “All women, regardless of their religion or ideology, have been discriminated against the men priority,” she recalls and asks for unity for women.

Stamou does not feel identified with the feminist movement in her country, though, because she says that “they have tried to impose another oppression, telling us what we should do and what not. The feminist movement in my country considers Muslim women oppressed, brainwashed and unable to form their own opinion.” Even so, this 8th of March she will participate in the mobilizations and the strike for the International Women’s Day, to stand up for women’s equality rights.

>>> You may also read: Muslim and feminist? These women show it is possible<<<

Neither submissive nor stupid

It is the demand for equality that Muslim women ask not only towards men, but towards some non-Muslim women who insult them or believe that they can not be feminists. They repeat for the umpteenth time that the veil or hijab is a personal and religious option. They do also condemn those policies in countries where women are forced to wear it.

The recently appointed High Representative of the UN Alliance of Civilizations (UNAOC), Miguel Ángel Moratinos, even highlighted this week on Twitter that in his fight for equality for women he will also include “the perception of Muslim women.”

During my tenure at @UNAOC, I aim to add a fifth pillar: Women. The perception of Muslim women, violence against women globally, and women empowerment are all areas that I would like to bring to the table. #WomensDay #WomensHistoryMonth #GenderEquality

“I do not accept that other women educate me, because I believe that I have enough tools, knowledge and critical thinking for me to rethink myself the questions of how I choose to lead my life and my spirituality,” explains Chaoui, from Barcelona.

“I do not accept that other women educate me, because I believe that I have enough tools, knowledge and critical thinking for me to rethink myself the questions of how I choose to lead my life and my spirituality”

The chairperson of the Citizen Platform Against Islamophobia and CEO of the Halal Institute in Spain, Isabel Romero, says that “of course” she takes part in the feminist strike and will be demonstrating. She asks “to leave us alone with what we wear or what we do not wear. If there are Muslim women who decide to cover themselves with the hijab, because they think that is part of their religious commitment, they are not hurting anyone.” By the way, she does not wear a headscarf.

Not dressing with a veil, the discrimination suffered by Romero is minor, she admits. But the tables turn when others learn about their faith: “I have been a professional for many years and at the moment in which I identify myself as a Muslim woman, it seems that I can only comment from that axis (and) it seems that I cannot give an opinion on economy, society or anything, just because I am Muslim.”

“I have been a professional for many years and at the moment I identify myself as a Muslim woman, it seems that I cannot give an opinion on economy, society or anything”

Faced with the image of a submissive woman, Romero emphasizes that different rights of women such as divorce or inheritance have already been established in the Quran. The Islamologist and professor of the University of Barcelona, ​​Dolors Bramon, who is not a Muslim, also considers that the sacred book of Islam was revolutionary for women’s rights. She explains it in her book Ser mujer y musulmana (Being a Woman and Muslim)  (Ed. Bellaterra) and explained it HERE on Salam Plan.

Aurora Ali is secretary general of the Muslim Association for Human Rights, based in Spain. “Muslim women are not clothes”, she answers to those who believe that headscarf and feminism are not compatible. “Wearing the hijab right now is an act of bravery, a feminist claim, because ‘it is my faith and I am going to wear it and I decide on my body’, ” she claims. Like Romero, she recognizes that on the street she has the “privilege” of not being an object of hatred because she is Muslim, since she has chosen not to wear hijab.

“As soon as they see that you are a Muslim woman the hate speech is directly the typical one of: ‘your country’, ‘in Saudi Arabia’, ‘in Iran’ … Then the attacks follow and then the terrorist insult, after [calling you] ‘submissive'”

She says that she has suffered the so-called “gender Islamophobia” on social media. “As soon as they see that you are a woman, you are a Muslim, then the hate speech is directly the typical one of: ‘your country’, ‘in Saudi Arabia’, ‘in Iran’ … Tatata, tatata”, she lists with glut. And she adds: “They start with this, then the attacks follow and then the terrorist insult usually comes, after [calling you] ‘submissive’. And this happens to virtually every woman who is visibly Muslim in their social networks. ”

She confesses that it is precisely that comparison of Muslims to terrorists the insult that has hurt her most, but not when getting it on Twitter or Facebook, but from the Administration in training courses against violent radicalization and terrorism. She cannot go into detail on this, due to a confidentiality clause she signed.

Equality, equality, equality. It is the concept cited by all these women when asked about their claim this International Women’s Day. They also fight for the empowerment of women, the end of the so-called “patriarchy“, against glass ceilings to reach high positions or the discrimination in the labor market, in society … struggles equal to those of other feminists which for Muslim women sometimes become double as difficult, though.

The most common discrimination that visibly Muslim women -meaning the ones who wear a headscarf- face twofold is found in the labor market, according to several interviewees of this article and data which confirm that.

Women wearing a headscart in the photo of their CV only received an invitation to a job interview in 3% of cases in Germany, according to a study on “Forgotten women” carried out in 2016 in eight European countries by the European Network Against Racism (ENAR). In Belgium, 44% of employers admitted that wearing a hijab could negatively influence the candidate’s selection.

Faced with incomprehension or rejection of Islamic feminism, the spokesperson of the European Forum of Muslim Women Hajar El Jahidi asks not to be marginalized: “The real fight for social justice exists when we fight for another human’s rights even if we don’t agree with or understand them.”

“It’s time for women especially to come together a lot more, to stand together in solidarity against all of these issues and not just speak but to act together and stand up for each other,” executive director of the Islamic Society of Britain, Julie Siddiqi, has asked on a video released by the British NGO Tell Mama. European Muslim women also want equality… and inclusion in the feminism movement.