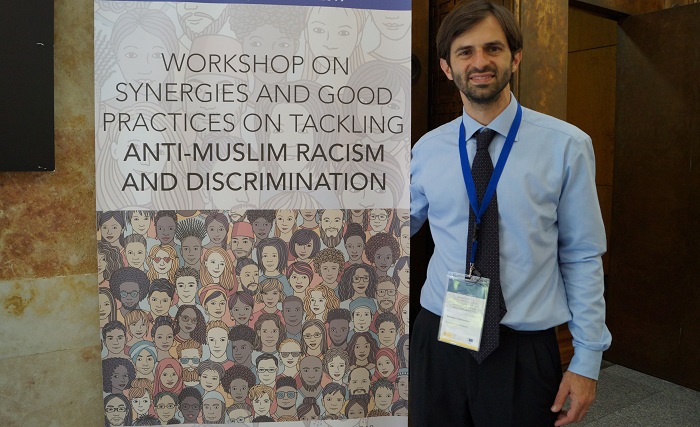 Tommaso Chiamparino is the European Commission’s coordinator on combating anti-Muslim hatred, a role he considers goes hand in hand with fighting for the rights of everyone, for an open, diverse society.

Before taking this position, Chiamparino had been working on European policies on how to combat racism and xenophobia, for the last three years particularly on the area of tackling hate speech online. For him it is key that minority groups are heard and taken into account in the European Commission, baring in mind that there are around 26 million Muslims in Europe, many of them being European Muslims.

Chiamparino organized a workshop held recently in Madrid together with the Spanish government where around 120 actors from civil society and public officials came together to discuss about synergies and good practices on tackling Islamophobia in the European Union. His team helped to bring together a diversity of actors from all over the EU, ranging from human rights associations, Muslim associations or academe to government officials or police officers tackling hate crime. He spoke to Salam Plan for this interview just after the one and half-day workshop, in which this website against hate was also invited to take part.

What does your position as head of the European Commission’s unit to tackle Islamophobia mean?

The key role of the coordinator to combat anti-Muslim hatred is to ensure that the different Commission services are involved from different angles which might be relevant to fight against intolerance, discrimination and hatred against Muslims. That could be from the side of hate crime, potential responses, on the side of education with the tools that we have, types of funding, for example, or other areas which might be relevant. So, ensuring a mainstream; also the need to protect the rights and to tackle forms of racism and intolerance.

The other main role that I have is to be a sort of contact, for both society organizations from the ground, to transmit messages from things that are happening on the ground to the political sphere of the European Commission, as well as for national authorities and local authorities, when it comes to how to bring together the relevant actors to tackle intolerance, discrimination and hatred against Muslims.

So, in short, it is a facilitator role in a way, trying to bring together all the different actors into this fight.

“There is a general societal challenge, in terms of dominant narratives and how we can promote alternative, positive narratives to those who spread intolerance, hatred, rejection”

More than 100 actors gathered in Madrid to speak about strategies and the needs and challenges to fight Islamophobia. What do you take with you from this meeting?

You might say numbers are not important, but I think having a full room of people in a workshop, in a meeting that was held in a Government building and hosted by public authorities and the fact that these people were coming from the large majority of the Member States, and they were coming from both grass roots organizations working on the ground and from national or local authorities… they were in the same room, they were in the same groups discussing about how to cooperate or to find ways to work together. That was in itself a key achievement of this meeting: having people in the same room talking about concrete forms of cooperation.

The outcomes are homework for everyone, including the Commission of course, and other public authorities to convene platforms open to civil society actors on how to find responses in the different areas. For example, training the police to recognize islamophobic hate crime or how to work together with the equality bodies and to ensure a mechanism of cooperation between civil society and political bodies and prosecution of cases.

During this workshop, Muslims’ associations and also other civil society associations showed on Islamophobia being also in the political discourse. What can the European Commission do in that respect, especially given the new spectrum in the European Parliament?

I think there is, on the one side, a general societal challenge, in terms of dominant narratives and how we can promote alternative, positive narratives to those who spread intolerance, hatred, rejection, etcetera.

What we can do is to continue to work in an area where we have been working a lot on, for example in the online sphere, so how to promote positive narratives of tolerance online.

In addition, the challenge is to transmit the message that this is not a fight that we need to take for one group: for Muslims, for Jews or Roma people or LGBT people, but we need to do it for a model of society that we want. In that sense, I think there might be several allies among the political community as well about a common message: that it is about a model of society based on non-discrimination, tolerance -that is at stake and we need to promote and protect in the future.

“We are all part of the same, plural society. I am personally non- Muslim, but I value a society where Muslims, or other groups, are living next to me and that the school of my children reflects such a mix”

Working specifically on Islamophobia, what do Muslims mean to you? What would you tell non-Muslim people who are afraid or spread hate?

For me it is quite simple: we are all part of the same, plural society. I am personally non- Muslim, but I value a society where Muslims, or other groups, are living next to me and that the school of my children reflects such a mix. The fact of not being part of the community makes me feel an even stronger responsibility: I devote my work to help transmitting the voices of groups that often are not heard, that often don’t have spaces in which they are represented and that don’t have access to policy making… hoping my work will soon not be needed anymore: it will mean more diversity, more tolerance.