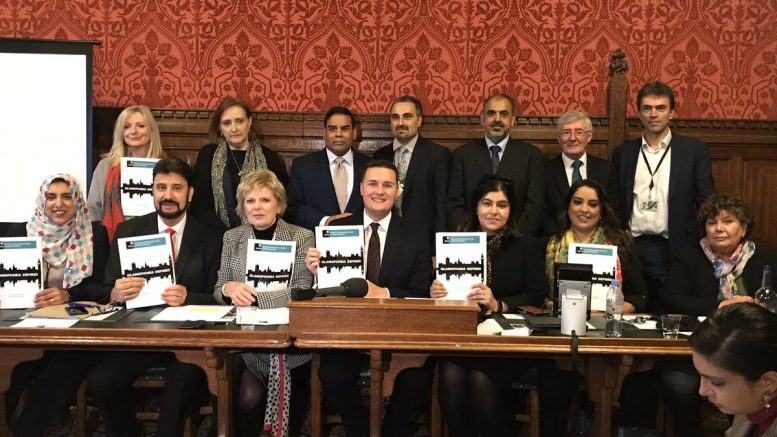 Members of the All-Party Parliamentary Group on British Muslims during the presentation of the report.

“Islamophobia is rooted in racism and is a type of racism that targets expressions of muslimness or perceived muslimness.” This definition is the result of half a year of investigation and consultation directed by the All-Party Parliamentary Group (APPG) on British Muslims.

“There is a desirability of criticism, debate and free discussion of Islam as a religion by Muslims and non-Muslim participants in the inquiry”

Throughout that time, the group has consulted academics from at least 15 universities -including Oxford or Sussex-, Muslim organisations – like Tell Mama or Runnymede Trust– and local Muslim communities, lawyers and police about their experiences of Islamophobia and how it should be defined. The reason? To be able to address and better tackle a type of hate crime with a common “working” ground after “twenty years of debate” on anti-Muslim hatred.

“For too many members of our Muslim community Islamophobia is an everyday experience. Let’s get this definition agreed and then let’s eradicate Islamophobia,” Conservative MP Anna Soubry, cochair of the APPG, tweeted on Tuesday, when the report was launched. “Islamophobia isn’t just anti-Muslim hatred. It’s about everyday discrimination that takes place (…). It can be deliberate or unconscious bias,” Labour MP and also cochair of the APPG, Wes Streeting, wrote.

Islamophobia is not always an accepted concept as some people argue it does limit freedom of speech and does impede criticism against Islam and Muslim people. “Let us be clear,”the report says on this respect, “the aim of establishing a working definition of Islamophobia has neither been motivated by nor is intended to curtail free speech or criticism of Islam as a religion”. It goes on stating there is a “desirability of criticism, debate and free discussion of Islam as a religion by Muslims and non-Muslim participants in the inquiry” and it establishes the limits when it “den(ies) or impair(s) their fundamental freedoms and human rights”.

Besides, the document argues “the explanatory notes provided under the IHRA [International Holocaust Remembrance Alliance] definition of anti-Semitism could, in all fairness, be adopted in their entirety to Islamophobia”.

“The explanatory notes provided under the International Holocaust Remembrance Alliance’s definition of anti-Semitism could, in all fairness, be adopted in their entirety to Islamophobia”

The report gives various examples of Islamophobia which have been on the news in the UK, ranging from violent attacks to the promotion of them or taking discriminatory measures:

While an Ipsos Mori survey “found that the majority of Muslims believe Islam is compatible with the British way of life, a separate survey of the wider population by polling firm YouGov, found that 46% thought there was a ‘fundamental clash between Islam and the values of British society’,” The Independent reported.