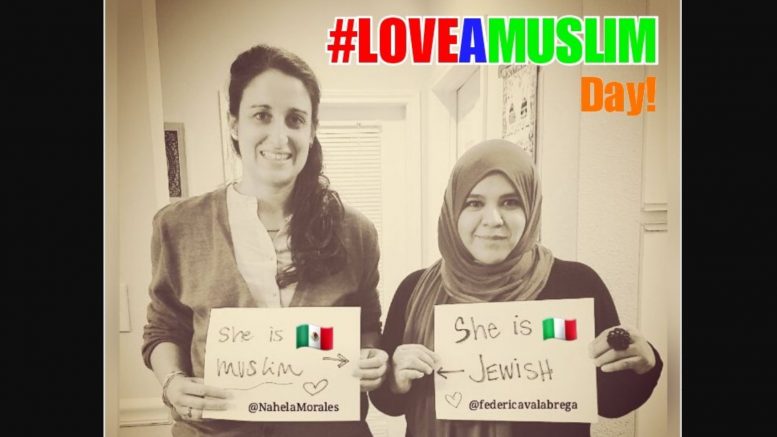 A Jewish and a Muslim Woman stand together for 'Love a Muslim Day'. Source: Twitter

The ‘Punish a Muslim Day’ which was promoted through anonymous letters sent in the UK found not only the strong answer of people and authorities backing Muslims but also no major violent incident was reported.

Whoever wanted to make a nightmare of the yesterday, April 3rd, did not manage to accomplish this goal. While authorities are still investigating who the author(s) of the letter was which appealed to hurt a Muslim in various ways this Tuesday, the hate campaign itself has had little support. Police has not registered any attack related to it. On Twitter, the hashtag #PunishAMuslimDay found followers, though: 64,000 tweets with that concept were registered at the website Trendsmap, not only across the United Kingdom, but also in the US, Middle East and South East Asia.

“Punish A Muslim Day” letters are being sent to families in East London. The letter details a point system for each action & a reward. For example pulling a Muslim women’s hijab is 25 points, throwing acid is 50 points and burning or bombing a mosque is a whole 1,000 points. pic.twitter.com/6kmCrDrXt0

Nevertheless, authorities and different NGOs as well as mosques themselves mobilized to counter the hate campaign with a pacific ‘Love a Muslim Day’. London Police, for example, went out and about to inform the public and promoted the idea of standing together, also on social media. About 100 people formed a human chain around a mosque in Newscastle against Islamophobia, Metro UK informed, among other activities organized throughout the country.

“Muslim communities have reached out to others and have made this day more about the need to collectively challenge hatred, intolerance and prejudice”

As for the loving campaign which emerged as a response to the hate later it did win as well on Twitter, but not with a big difference. #LoveAMuslim was trending topic and was tweeted 74,000 times, mainly in the UK and US. #LoveAMuslimDay obtained another 13,000 tweets, according to Trendsmap. Although the total of these tweets make 87,000 we might note that some users may have used both hashtags at the same time.

Instead of “Punish a Muslim Day”, we will have #LoveAMuslimDay 💚because we believe in spreading love and not hatred 🙏🏽#SpreadLoveNotHate pic.twitter.com/k3fYvmJrsU

Actress Alyssa Milano also joined the #LoveAMuslim topic on Twitter proudly showing that a good friend of hers is Muslim. She got more than 13,000 likes:

This is my best friend of 23 years. His name is Alaa Mohammad Khaled. I will #LoveAMuslim for the rest of my life. pic.twitter.com/Y0Y7xPpi7t

The NGO Jews for Racial & Economic Justice in the US publicly showed their support as well:

Our members spent this sacred 4th day of Passover outside mosques and Muslim community centers across NYC to support and protect our beloved Muslim family. There is no better way to spend this holiday of liberation.

The British NGO which measures anti-Muslim attacks called Tell Mama has shown its satisfaction with yesterday’s result and has called for a collective work on countering hate: “The ‘Punish a Muslim Day’ has caused fear and disquiet amongst Muslims, though many Muslim communities have risen to this with dignity, discipline and care for others. They have reached out to other communities and have made this day less about them, and more about the need to collectively challenge hatred, intolerance and prejudice,” Iman Atta, director of Tell Mama, said.

“We are proud of the values that bind us in this nation of ours”, he added.