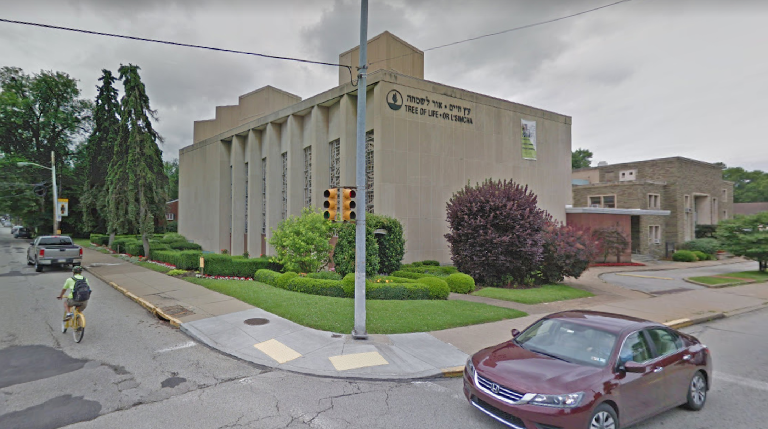 The Tree of Life Sinagogue in Pittsburgh was attacked on October 27th 2018. Archive picture from Google Street View

The Antidefamation League (ADL) has asked authorities to investigate the sinagogue shooting in Pittsburgh as a hate crime. Georgetown professor Bruce Hoffman says it is more than that.

At least ten people died this Saturday after a man entered the Tree of Life Sinagogue in Pittsburg and opened fire. “All Jews must die”, he shouted, according to witnesses, Reuters reports. There are also several people injured, two of them in critical condition. People had gone to the temple to celebrate sabbath, the sacred day for Jewish people.

The suspect has been identified as Robert Bowers (46). He is in custody and has been taken to hospital. He had posted a message on Gab, a similar platform to Twitter according to Reuters, where he attacked the charity work of a Jewish NGO devoted to refugees called Hebrew Immigrant Aid Society. He critiziced its work as he considered it “likes to bring invaders in that kill our people. I can’t sit by and watch my people get slaughtered. Screw your optics, I’m going in.”

ADL’s CEO, Jonathan Greenblatt, tweeted the Antidefamation League believes the shooting in Pittsburgh this Saturday is “the deadliest attack on the Jewish community in the history of the United States.” In a press statement, the organization called on authorities “to investigate this as a hate crime.”

¿A hate crime or something else?

One of the major experts on terrorism analysis in the US and worldwide, Bruce Hoffman, said to Salam Plan: “Hate crimes and terrorism are not mutually exclusive. They are the same and it baffles me why such distinctions are made. Certainly, the mail bombs and Pittsburgh shooting today, according to my definition, are acts of terrorism.”

The meaning of “terrorism” is a matter which many experts have been trying to clarify for decades. Hoffman, who is a Georgetown professor and director of the Center for Security Studies at that university, wrote a book called “Inside Terrorism” (Columbia University Press). In it, he describes a variety of studies on the issue and comes to the conclusion that any violent attack with ideological o political motivation is an act of terrorism. Salam Plan explains it HERE.

This attack occurs at a time when ADL has reported a “historic increase” in both anti-Semitic incidents and anti-Semitic online harassment.