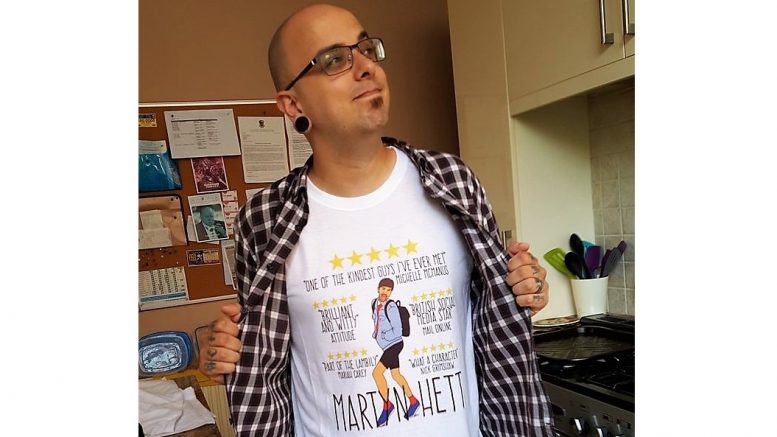 Dan Hett honoured his brother Martyn this way some days after the attack. Source: Twitter

Dan Hett has received so many press requests for an interview that he has already warned on his website and his Twitter account with a “polite no” that he is not available for journalists at the moment. Lately, he has got quite famous in the UK and he himself highlighted -somehow astonished- having reached 10,000 followers just recently.

The reason for so much interest in this man is not for being an appreciated British digital artist and a Bafta award winner, but rather for his commitment to fight Islamophobia and racism after losing his brother Martyn (29) at the Manchester bombing last May. He has publicly denounced that he receives online threats from far right people, because he does not believe that terrorism is a problem related to Islam nor immigration.

Only a few days after that attack that killed 22 people, The Guardian published an interview with Dan Hett in which he explained not only his frustration about what happened, but also about the anti-immigration defenders taking advantage of the the massacre. The author of that attack on May 22, Salman Abedi, was the son of immigrants born in the United Kingdom and a resident of the same area as the Hett family.

“As a young half-Turkish Mancunian, I’m not worlds away from this guy [Abedi]. The idea that somebody would say, ‘Oh, this is an immigration problem’ frustrates me. How is this an immigration problem? A UK-born terrorist took out, among many other people, my UK-born Turkish brother … In an alternate timeline, the roles could have been reversed,” Dan Hett said at the time. “In many ways we are completely alike,” he assured, including himself in this parallelism, in another interview with Manchester Evening News.

“A UK-born terrorist took out, among many other people, my UK-born Turkish brother … In an alternate timeline, the roles could have been reversed”

He regrets -as he told the local newspaper- that there is a “pattern” by which some people take advantage of terrorist attacks to promote an anti-immigrant and Islamophobic debate. In his opinion, the real danger lies in the rethoric that comes after the attacks and alerts: adopting a hate speech against other cultures only contributes precisely to what the ISIS (Daesh) seeks. “You are part of their plan,” if you do so, he warned. He has chosen to be just the opposite and to fight actively and peacefully against the terrorists’ goals. That’s why he does not stay silent.

Martyn Hett was 29 years old when he died in the attack on the Ariana Grande concert. Source: Twitter

Dan has also spoken out against a new book by Tommy Robinson, founder of the far-right organization English Defence League (EDL) in Manchester, who has 381,000 followers on Twitter and which has earned Dan the latest wave of insults on the Internet. Robinson presented it last Friday, November 3, in an event with about thousand attendees, according to British media.

“The most dangerous book in Britain. Get a copy before they ban it,” Robinson boasts when he publicizes it. “Mohammed’s Koran: why Muslims kill for Islam” is how he has called his interpretation of jihad, equating those who profess Islam with terrorists.

Robinson (whose real name is Stephen Christopher Yaxley) left the EDL in 2013 stating that he would only fight against the Islamist radicalization. He did it with the support of the Quilliam Foundation, known for its work against extremism, as The Telegraph recently recalled. But in 2016 he founded the British version of the German xenophobic movement Pegida. In addition, the Quilliam Foundation itself claimed that it had attacked its premises and that Robinson seemed to have experienced a setback in leaving his extremism behind.

Dan’s activism has cost him numerous attacks through Twitter, either openly or by direct messages (in private), and also through email. He shared some of the last insults he received, although he refrained from publishing the ones he considered “too offensive”.

yesterday I received an astonishing amount of abuse, most of it too offensive to put back on here.

I am not afraid to speak out. pic.twitter.com/rhmpZ4V0JK

Among the messages he has received, several include insults such as “stupid” or “dummy”. Also one he -who is also a victim of terrorism himself due to his loss- highlights: “Islam killed your brother. I bet hes [SIC] out there proud of you,”challenged one Twitter user. “Love Manchester. Hate racism,” he has tweeted these days in response to these types of attacks. And he also recalled: “I’m not afraid to raise my voice.”

That is precisely the mission he has engaged in after losing his brother. “I want to talk about the responsibility of normal people to raise their voices and not ignore what is happening,” he explained in the already mentioned interview with the Manchester newspaper. Now, far from being daunted by the attacks, this father of two seems to gain more strength at his 32 years for his upcoming commitments: he will conduct a schools tour to talk about “the true effects of extremism” and will participate as a speaker at the next TEDX conference to be held in Manchester next February.

This Monday, Dan Hett, made clear that the attacks against him on Twitter will even be useful in his work against extremism: “The troll hits ‘send’, but never imagined that their abusive messages would add to my discussion material in schools almost instantaneously.”