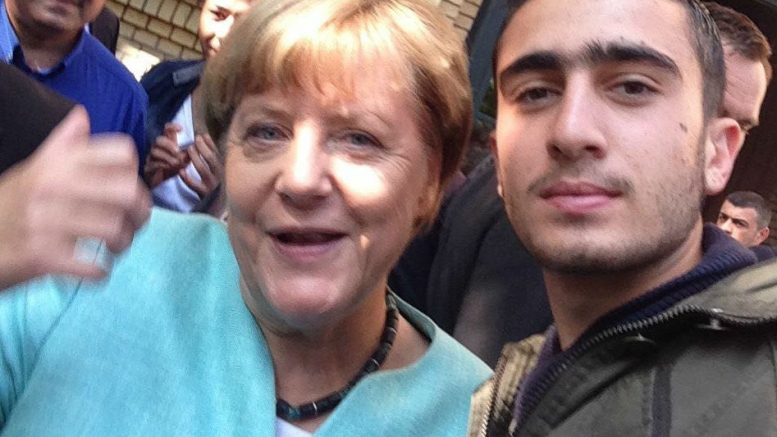 Anas Modamani posed with Angela Merkel in 2015. Copyright: A. Modamani

Anas Modamani is saddened by the good outcome of extreme right Alternative for Germany (AfD) party in last Sunday’s general election, but he assures that he is not afraid and asks for more vigilance against some asylum seekers who he considers to take unfairly advantage of the circumstances.

On the wall of his room in Berlin, Modamani has hung the selfie he took with Angela Merkel soon after arriving in Germany in August 2015. He recognizes in a telephone conversation with Salamplan.com that the encounter with the chancellor was “a great experience” for him. He had fled the war in Syria at the age of 18, where he had succeed at his A-levels. He was eager to find a job and a university to study at near his hometown of Darayya, in the suburbs of Damascus. But there was a long and dangerous way to get to the university and when the house where he lived with his parents and siblings was reduced to rubble by the bombings of the war he decided to leave.

He arrived in Germany after a brief stay in Turkey, having survived the crossing of the Aegean Sea and the so-called “Balkan route” that in those days saw so many asylum seekers pass. But that selfie in which he posed smiling with the chancellor who opened the doors to the refugees played a bad trick and some took the image to assure he was a terrorist. Today it is clear that it was simply fake news and Modamani even sued Facebook in court for spreading it. He lost the case in March of this year, although a couple of months before -and just a couple of days after it went public that the refugee had filed his demand– Mark Zuckerberg’s company promised to fight against fake news in Germany.

It’s a real shame that AfD is in the ‘Bundestag’ with 13% of support, but I do not really feel afraid

Modamani now lives in a country where the extreme right party AfD openly opposed to Islam has obtained 94 of the 709 seats in Parliament, with 13% of the votes. He was not expecting it, because he has felt welcomed despite the bad experience with threats in his Facebook account. “Well, it’s a real shame that they are in the Bundestag with 13%. That’s a lot. I feel very bad (for that). I would never have imagined they had so much (support)”, he admits with a good German accent on the other side of the line. But “I do not really feel afraid.” He explains that he feels very well integrated, working as a cashier in a McDonald’s and enrolled to start his IT studies at the Humboldt University of Berlin in the next semester. “I feel welcome in Berlin. I have built many friendships, with many Arabs born in Germany, with Germans, at work too…”

Alternative for Germany emphasized during its campaign that the German language would be key to keep the national identity “safe” of the threat they think is posed by the arrival of the hundreds of thousands of asylum seekers (there were more than 1 million only in 2015, according to official data of the German authorities). Modamani, who is now 20 years old, is interested keen to integrate and has already reached level B2 of German, which means that he can speak with native speakers without much difficulty on either side, according to the Goethe Institute’s definition. This week he delayed the interview with Salamplan.com because he needed to study for a level test in order to qualify for a scholarship. His rich vocabulary during this interview leaves in the background some grammatical errors that are even committed by those who have spent their whole life speaking this complicated language.

Of course there are many extremist people, like Daesh (ISIS), but if you are a Muslim in your heart, you do not cause any trouble

The radical right party argues in its ideology as well that Islam and democracy “don’t fit together” and they hung up posters on the streets with phrases like “Islam does not fit our kitchen” with a pig as image or “Burkas? We like bikinis.” Its election manifesto assures that this religion “is not part of Germany”. On the contrary, Modamani believes that Islam does have a place in this country and stresses that he has had no problem due to his believes as a Muslim. “Of course there are many extremist people, like Daesh, but if you are a Muslim at home, in your thoughts, in your heart … you do not need to show it to everyone, so you do not cause any trouble. The word Islam means peace and I have read the Qur’an: it says that one must always be peaceful, polite and kind,”anwers this Syrian refugee.

He does not speak of anger at any moment; he does mention, on the contrary, more than once that he feels “saddened” by this vision of Alternative for Germany and the support it has received. “They equate Islam with terrorism, but no. Maybe the terrorists have a mental problem, they are fools, they are not true Muslims (and they should) leave Islam alone.”

We haven’t had any information (about my friend Mounir) for a long time. We don’t know if he’s stille alive

He recalls that before the war he enjoyed playing with children -Muslim and Christian alike- at his school in Darayya. They often went to the park, although at that time he also helped his father at work, repairing engines. With the war came the bombings that not only destroyed his house, but also killed three uncles of Modamani. “We did not take any weapon, nothing,” he says. He often thinks of his friend Mounir, who was put in prison a long time ago. “We have not had any information (about him) for a long time. We don’t know if he’s stille alive,” he explains about this case, which recalls the thousands of cases reported in various Amnesty International reports (Syrian Torture Prisons, August 2016, Mass Expenditure and Extermination, February 2017). 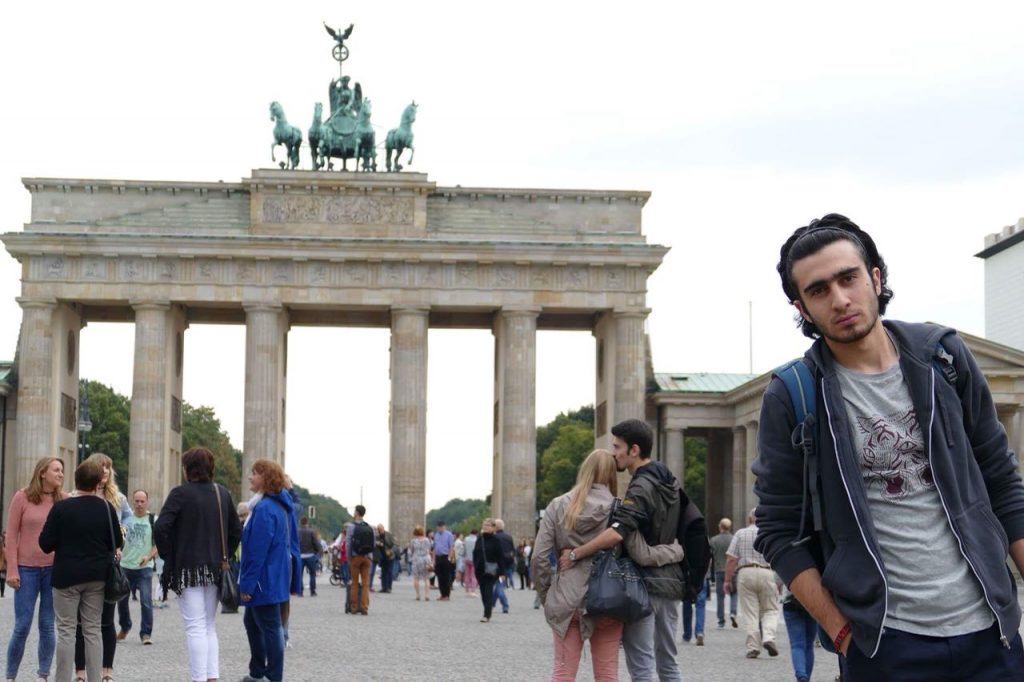 Anas Modamani poses at the Brandenburg Gate, today’s symbol for the fall of the Berlin Wall. Copyright: A. Modamani

This week, the European Union member States should have relocated or resettled 180,000 refugees after a two-year-long period, but they have only accomplished a 25% of it. Modamani believes that the solution is to carry out checks on asylum requests at intermediate countries as well as providing then a safe passage for those who qualify for it. At the same time he is in favor of increasing the control of the German borders, just as AfD wants (although the party also speaks of building up fences in the Schengen area).

We just want to live in peace, we also want to work. (But) they need to increase the border controls in Germany (to avoid people taking unfairly advantage of the situation)

Modamani agrees with them that it is necessary to avoid those who, according to him, take advantage of the circumstances arguing, for example, to be Syrians without this being true or taking public assistance without working. “I am also in favor of increasing the control of German borders, (…) there has to be more control. In Berlin there are many people who have been here for almost 6 years and live receiving money from the Hartz IV [a controversial German social program] or the work center [which complements salaries to reach a monthly minimum]. There is a lot of work in Germany. They do not ask for so much experience, you can apply for a job and get it. But they do not want to work, I think.” He clarifies that he has been working for a year and earns about 1,200 euros a month, although he has also received a supplement from the state when the salary was lower.

This Syrian, who has not technically been granted asylum, but a temporary protection, believes that greater control is not only necessary for security or social assistance, but also as a tool to combat fear and hatred against Islam in Europe. ” German police have to know where each person comes from, what they do every day in Germany, whether they work or study…”

I don’t have a special dream, (other than) a normal life: to find a job with a better loan to send money to my family, a large flat, get married…

At the same time he warns German citizens about fake news circulating on the Internet and asks them not to trust them, to relate directly to the refugees and thus discover, as Modamani argues, that “we just want to live in peace, we also want to work.”

Although this 20-year-old feels integrated in his Berlin environment, he misses his family a lot: “I do not feel at home here. A foreigner will remain a foreigner.” Yet he has no intention of returning to Syria “at all” when the war is over. He argues that he has already begun to build up a good future in Germany: “I have built up a lot here: work, studies … and maybe the situation will improve so that I feel at home, but later.” Anas Modamani says that he does not have “a special dream, (other than) a normal life: to find a job with a better loan to send money to my family, a large flat, get married…” At the moment, he is happy to start his university studies in a few months and to be able to combine it with his job.