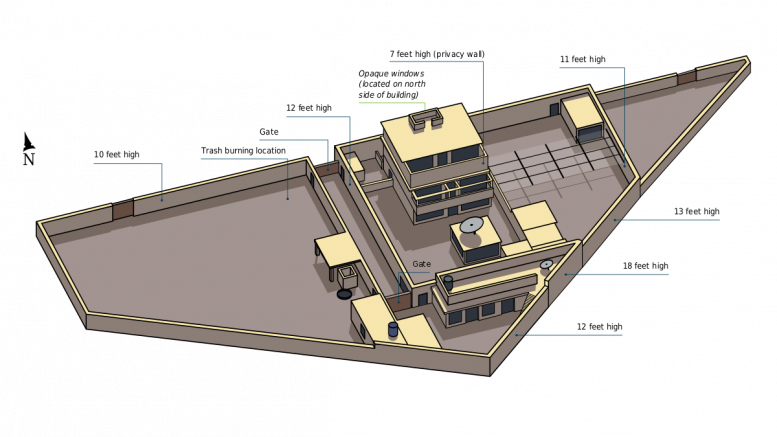 Diagram of Abbottabad's compound where Bin Laden spent his last days. Copyright: US Dept. of Defense

The US intelligence agency has made 470,000 new files public from those seized in the last residence of the founder of Al Qaeda, when he was killed by SEAL agents. Other documents will remain secret for security and copyright reasons… but also for containing pornography in some cases.

The CIA has revealed these documents found in May 2011 at Osama bin Laden’s compound in Abbottabad (Pakistan) include the terrorist leader’s personal diary and more than 18,000 documents, the agency explained in a press release. There are also 79,000 audio and image files, which include practice reels for public speeches, audio correspondence, and imagery gathered or generated by Al Qaeda for a variety of purposes. In addition, there are 10,000 videos, among which you can find the son of Osama bin Laden, Hamza, as “young adult”, home videos, statements by Osama and terrorist propaganda.

These documents come in addition to others previously disclosed to favor transparency and a greater public understanding of what Al Qaeda is and how its former leader was, provided they allow safeguarding security, the CIA has assured. But those files which continue to be secret not only remain hidden from the public for this reason, but in some cases also for being “materials protected by copyright; pornography; malware; and blank, corrupted and duplicate files”, the agency has recognized.

Among the videos found in the Abbottabad residence which have not been disclosed due to copyright issues, there are family movies: Antz, Cars, Chicken Little and Ice Age: Dawn of the Dinosaurs; as well as Resident Evil, The Three Musketeers or Batman: Gotham Knight. The security forces also found documentaries of the BBC, CNN or National Geographic, some related to Bin Laden, but also some about other issues, such as “The Story of India”, “The Kremlin from Inside” or “Peru Civilization”.

The intelligence agency has not given any further explanation about the pornographic materials it found.

“Today’s release of recovered Al Qaeda letters, videos, audio files and other materials provides the opportunity for the American people to gain further insights into the plans and workings of this terrorist organization,” said CIA Director Mike Pompeo. “CIA will continue to seek opportunities to share information with the American people consistent with our obligation to protect national security.”