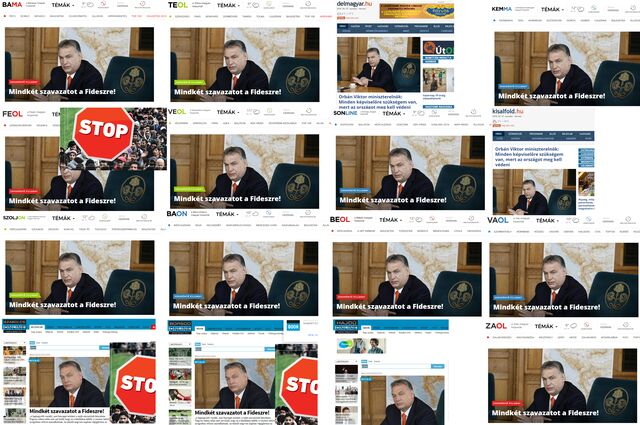 Regional and local newspapers all spread the same message of the government.

Far from losing voters, Viktor Orbán’s ruling party won the elections by a landslide after putting its anti-immigrant politics at the heart of its campaign. A report from the European Parliament done before this turnout warns about a serious risk for the rule of law in Hungary.

A group of grannies agrees to go together to the market in their town because they are afraid of immigrants coming to rape them. It is not a fictional scene. It is what is really happening in Hungary, as described by Edit Inotai, an analyst at the Center for Euro-Atlantic Integration and Democracy (CEID) in Hungary, on a telephone conversation with Salam Plan. She cannot help but laughing at a situation that seems ridiculous to her. “There are not even immigrants here,” she says.

László Cselényi, former director of the Hungarian international television Duna TV, criticizes that there is no real government programme. “They are based on exploiting fear of the unknown, fostering hatred towards other religions and cultures,” he argues.

More and more Hungarians agree with the extreme defense of Hungarian culture as they think they could be facing a flood of illegal immigrants who are potential terrorists because they come from countries with a Muslim majority, as Orban’s government puts it. According to it, thousands of them are waiting on the other side of the border fence raised during the European refugee crisis to cross it as soon as they can. Orbán and his party, Fidesz, have been repeating this idea of ​​the ‘invading threat’ for years.

“It’s more of a cultural thing, to maintain the European society. I don’t think we Hungarians have a strong Christian faith, like the Poles,” Inotai points out. “I also have conservative friends who travel a lot abroad and say they see a lot of Muslim people and tell me: ‘we don’t want a country with such diversity'”, adds the analyst.

In words of the government’s spokesman, Zoltan Kovacs, the people who would arrive in Hungary should the Executive accept the current quota of about 1,200 refugees or future quotas, would just bring “problems” with them. Orbán’s team does not distinguish between asylum seekers and economic migrants, so Kovacs denies their admittance as a human rights issue. “The government firmly rejects the principle that current migration should be seen as a human right,” he recently said.

The prime minister was re-elected last Sunday with 49% of the votes and a 70% of participation to the surprise of researchers, acknowledges Inotai, who thought that high participation would favor the opposition. In addition, another 20% of the votes was taken by Jobbik, the party which formerly was the far-right-wing representative in the country and which, for these elections, tried to swap into moderation and snatch votes from Fidesz.

Orbán said in an interview with the German newspaper Bild last January that for him, the refugees “are not refugees, but Muslim invaders”. He argued that is the reason why many Syrians had tried to reach prosperous Germany before going through “stable” countries like Hungary. It was in 2015 that many asylum seekers actually passed through the Magyar country, but most of them stayed there only during the days that the Orbán Executive prevented them from taking trains at the Keleti station in Budapest to continue their way out of the country.

“All terrorists are basically immigrants,” he said in another interview, this one with Politico in 2015, although it is an idea sustained over time by the Hungarian leader.

This barrage of statements against foreigners, especially against Muslim foreigners, found almost no ideas or contrary explanations in the public domain. Little did it matter that most of the terrorists who have attacked in recent years in Europe were born or raised here, like those who killed in Spain in 2017 or like the terrorists of the Paris attacks in 2015. Neither did it matter that the vast majority of terrorists had nothing to do with the hundreds of thousands of asylum seekers who arrived in the midst of the refugee crisis in Europe – although some did get away, like the teenager who attacked with an ax in a Bavarian commuter train.

It did not even matter that for mere practical reasons it might be interesting to host future workers in an economy that is certainly going well with only around 5% of unemployment, which nevertheless requires labor force in sectors such as construction, health or education, according to Inotai. She recognizes that the Hungarian language is very complicated to learn for foreigners, though.

And, while for the elections of 2014 some media had already closed and some NGOs critical of the government had already been raided in their headquarters, for this election the media and political opposition had virtually disappeared. Cselényi recalls that a friend of Orbán named Mészáros Lörinc owns 18 local and regional newspapers “that disseminate the same propaganda content”. Inotai adds that although there is still an important critical newspaper in Budapest, regional radio stations are also uncritical and only on the internet there is a broader spectrum with divergent opinions to those of Orbán. But older people in the provinces do not access these media, she thinks.

‘Serious risk for the rule of law’

This week the Member of the European Parliament (MEP) Judith Sargentini presented a report on the political situation in Hungary in view of the possibility that the Magyar State is failing to comply with the principles of the European Union of respect for human dignity, democracy, plurality, tolerance, etc. established in Article 2 of the Lisbon Treaty.

“Since 2012, the (Hungarian) Constitution has been changed six times. Justice has lost independence in favor of control of the Executive”, the MEP of The Greens highlighted at a press conference. She also pointed to issues such as the closure of media, a “new legislation that affects the freedom of religion, with already registered churches that were removed from registration,” or harassment of some NGOs and problems for freedom of expression.

Despite accusations by Fidesz’s MEPs of publishing the report four days after the elections in their country as a revenge, Sargentini stressed that she initially planned to publish it in March and it was precisely postponed not to interfere in the election campaign. In addition, she underlined that her report is based on facts documented by bodies outside the European Parliament, such as the United Nations or the Hungarian courts themselves.

An OSCE report on the 2014 elections already put in serious doubt the cleanliness of those elections, since Fidesz “enjoyed an undue advantage due to restrictive campaign regulations, biased media coverage and campaign activities that blurred the separation between the political party and the State”. On this occasion, the OSCE has emphasized that the news programmes on TV, for example, gave the government version and that the opposition had no real option to publicize its message.

The opposition does not want immigrants either

However, the opposition’s message would not have really refuted the anti-immigrant propaganda of Orbán’s team. For Inotai and Cselényi, there is no doubt that this year’s elections have suffered from a lack of plurality in speeches, not only because of the media panorama, but also because of the Hungarian opposition parties.

“The opposition parties ignored the issue of immigration – erroneously – to avoid falling into the trap of Fidesz. They did not dare to go against public opinion, given that they accused them of being agents in the service of foreign interests,” Cselényi explains.

“The opposition was very distressed about this topic. No one is really in favor of immigration, because society does not want it”

“The opposition was very distressed about this issue. No one is really in favor of immigration, because society does not want it,” Inotai says. There is another factor that explains the triumph of the speech of fear in Hungary, according to this expert. “It is not only the anti-Muslim propaganda, it is also the feudal situation of Hungary. The best results of Fidesz have been in the provinces, where they receive state aid with community work programmes. Many people live from it. They are very poor and in these areas there is no other work.”

The ‘Sargentini report’ now enters a period of amendments and will be finally voted on next September. In case of obtaining at least one third of the agreement of the European Parliament, Article 7 of the Lisbon Treaty will apply, which would lead to sanctions against the Magyars for violating the rule of law according to European regulations.

** Since you are here … we want to ask you a small favor. Share the work of Salam Plan so that more and more people get to know this journalism against hate, without propaganda, without sensationalism. Also, you can follow us on Twitter or Facebook. Pass it on. THANK YOU