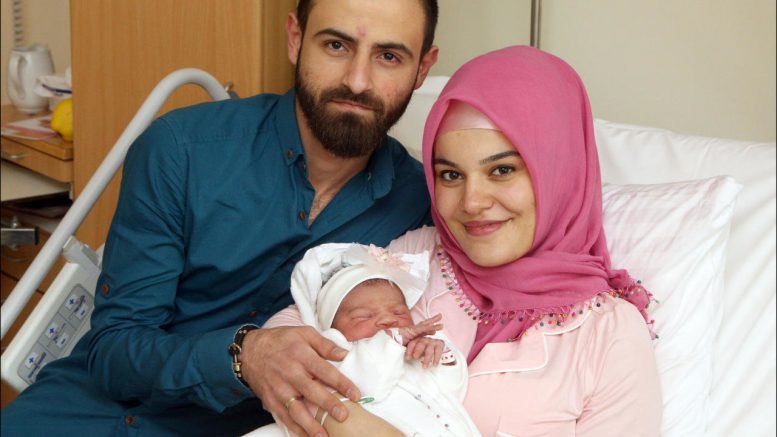 Asel baby with her parents at a hospital in Vienna. Copyright: KAV/ Votava

Asel was the first baby born in New Year in Vienna and hatred in social networks reached such levels that the president of the country and the cardinal of the city have come out to defend her.

The baby was born at 00:47 on January 1, 2018 in the Austrian capital, measuring 51 cm and weighing 3,460 grams, local media reported. The news went out with a picture of her with her parents. The happy mother, Naime, posed with a veil without suspecting what was about to happen, as she recognized later in an interview with the Austrian site OE24.

Along with the good wishes for the family, hostile comments against the family began to accumulate in social networks and comments on the Austrian media, just because they are Muslims. “Does this woman have cancer or why does she wear a headscarf?” or “the next terrorist has been born” are an example of the hate messages that were published, according to the Austrian media. Heute publication saw itself forced to post a comment on their Facebook account to curb the insults.

The secretary general of Caritas in the country, Klaus Schwertner, was the first public figure to react to the wave of insults. He published a post on Facebook to welcome Asel and propose a virtual #flowerrain for the family. The social network erased it but had to undo this quickly after Schwertner himself denounced it publicly.

Other pacifist organizations and jurists have also denounced insults for religious reasons. The Cardinal of Vienna, Christoph Schönborn, has also come out to defend little Asel and her parents. “Every child is a sign of hope, welcome and may God bless you, dear Asel,” he published on his FaceBook page on January 6.

Even the president of the country (without executive power, but with an institutional role), left-wing Alexander Van der Bellen, wanted to make clear his welcoming position in the same social network where many attacked the Muslim family. “‘All people are born free and equal in dignity and rights.’ Hope and solidarity are greater than hatred and harassment. Welcome, dear Asel,” he wrote.

In Austria, the coalition government led by the conservative Sebastian Kurz (ÖVP), which has agreed to work together with the ultraconservative Heinz-Christian Strache (FPÖ), has just been formed. Although the alarms rang internationally due to the return of the extreme right to power (they had already participated in an executive coalition before), Strache’s Islamophobic ideas are not that far from Kurz’s, as Salam Plan recently pointed out. In fact, there has been no public statement of solidarity with this family by either of them to date.

Despite the strong insults received, Naime assured OE24 that neither she nor her husband, Alper, were sad, but focused on their daughter. They were also very grateful for the welcoming messages, which they are receiving from thousands of other citizens thanks to the #flowerrain.