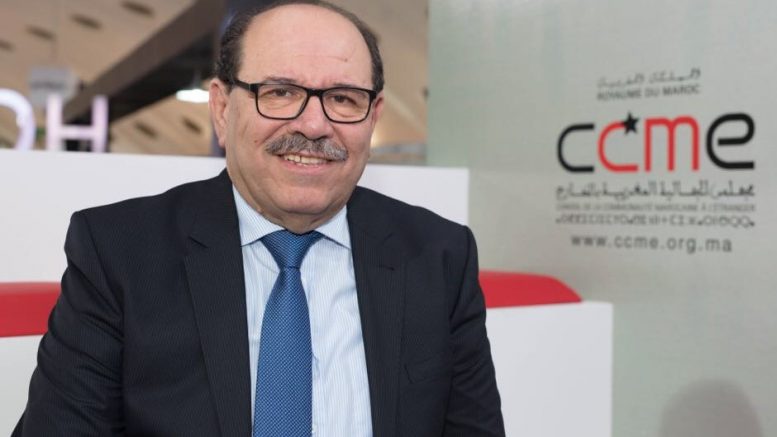 Abdellah Boussouf is the Secretary General of the Council of the Moroccan Community Living Abroad. © CCME

Secretary General of the Council of the Moroccan Community Living Abroad visits Spain this week to present his book “Islam and the universal common. Tolerance, coexistence of identities and religious cohabitation”.

Abdellah Boussouf is a Moroccan historian and since 2007 he leads the Council placed by king Mohammed VI of Morocco in Rabat. His latest work (published in Arab, French and Spanish for now) offers a compilation of essays in which he reviews historical episodes, Quranic quotes and texts of the Muslim prophet Mohammed to demonstrate that Islam is a religion of peace and respect for the ones who are different. He talked with Salam Plan at Casa Árabe (Arab House) in Madrid about this call for dialogue and a good coexistence.

In your book you write about historical moments in which different religions and cultures lived in peace. What has changed so much that it makes this so difficult in some cases nowadays?

Today we live a very difficult situation of Islam in the world. We have two extremes: the extreme of Islamophobia, racism (and) we have the other extreme: fundamentalism, radicalization and even terrorism. This book is a reminder for those who try to manipulate Islam, who try to instrumentalize it from both sides. It is meant to tell them that it is not Islam what they use, but lies about Islam. Islam has nothing to do with terrorism or fear. So Islam is not here to invade Europe or to be an element of clash with Westerners.

Islam is a religion like any other, a religion of peace, tolerance and coexistence. The historical description of fourteen centuries shows that Islam has never known terrorist movements against each other. It has never been in a situation of conflict related to a religious or philosophical conviction.

And why is there now so much Islamophobia and Islamist radicalism?

As far as Islamophobia is concerned, there is an unjustified fear. This fear is due to a total ignorance of Islam, today in our societies we know Islam very, very little. And we are afraid of the unknown. It was a great intellectual of Palestinian origin named Edward Said who spoke of the “shock of ignorances”. We are living that moment now.

As for the Muslims, in the case of those who claim to use Islam to perpetrate fear and terrorism, they have nothing to do with Islam. For us -I come from Morocco-, the King delivered a speech aimed at the Moroccan nation and the whole world in which he said that “the authors of a terrorist act are not Muslims”. Therefore, there is a manipulation of one side and the other: either for Islam to scare or to justify horrible acts of terrorism.

You claim that Islam is a peaceful religion, but Islamophobes and radical Islamists believe it is synonymous with war. What would you answer?

Islam has never been a religion of war. In this book, I start with Quranic texts that clearly say: “Whoever kills a soul, it is as if he had slain mankind entirely. And whoever saves one soul, it is as if he had saved mankind entirely.” Islam takes life and not death, contrary to what we are told today by these factions, which -fortunately- are not the majority and who preach hatred to others. The extremes meet, they feed each other.

“Terrorism has no nationality or religion”

In the recent attacks in Catalonia, the terrorists were of Moroccan origin (although all raised in Spain) and analysts tried to find in that origin the source of their motivations to kill. Do you think that is part of the explanation?

First: terrorism has no nationality or religion. They were of Moroccan origin but lived in Spain and were, mostly, Spanish citizens. And also the other perpetrators of the attacks in Belgium and France, European citizens.

I think that this is the mistake, that of trying to attach the responsibility to a country, an ethnic origin or a religion. I advocate a shared responsibility, we are all responsible today for this phenomenon that threatens us all. Moroccans have also paid a high price; and in (all) Africa, and in other places.

In another book, “L’origine” (The Origin), I try to explain why. It is a set of elements. I don’t think there is a magic recipe to say “this is the one responsible”, nor is there a single solution. There is a manipulation of religion, but there are also social reasons that must be addressed, because we must not allow social problems to absorb young people and become easy prey for the death recruiters.

“Islam and the universal common” is the title of the book you are presenting now. What three things would you highlight that Muslims, Jews and Christians have in common?

They are the three monotheistic religions, we worship the same God. A great Jesuit, Pierre de Chardin, said: “Everything that rises, converges”. So we converge on the same God.

Islam is a religion like any other. I think there are many things that unite us and very few things that separate us. We adore the same God, we have acts of adoration that are present in the three religions.
As believers we have to face the great challenges of our century. Humanity today is threatened by climate change, wars, family… In the past, Christians, Muslims and Jews contributed to the development of civilization, especially in Spain.

Andalusia is spoken of as the “paradise on earth”, where the three religions coexisted perfectly and in a very positive way. Jews, Muslims and Christians, who handed over Toledo, Cordoba, Seville and Sicily in Italy, but also Fez and Marrakech… history has many examples of living together.

“Media only speak when there are terrorist attacks, so we leave the field free for the xenophobes”

You worked for intercultural dialogue in France and Belgium, two countries with good electoral results for anti-Muslim political parties. How -do you think- that Marine Le Pen and Geert Wilders, leaders of the extreme right in the respective countries, are successful?

There are several factors. They are trying to cultivate fear of Islam, but there are other reasons: economic, social problems. Marine Le Pen has no plans for the French society, it has no solution for the crisis in that country. So scaring voters is the best way to attract a certain number of them, who sometimes lose confidence in the political apparatus.

I also think that media play a very important role: they only talk about trains that arrive late, they only speak when there are attacks, when there is an imam who makes a small statement … but when there are things that unite all the believers, all cultures, they don’t publish it. I created many initiatives in France of interculturality, interreligiousness, but nobody talks about that. Thus we leave the field free for the xenophobes, for the fascists.

Do you think these are the same problems for which France and Belgium have seen the followers of Daesh grow?

Yes, in some neighborhoods there are many problems: young people who don’t go to school, who are jobless, whith ignorance of religion, identity crisis … We have not done much to solve this, both the host countries and those of origin. We have not done what is necessary to accompany them, to allow these young people to access their identity and find a certain balance. We leave them alone. And, obviously, the fundamentalists, the terrorists recruit in these environments, where they (the youngsters) live in situations of fragility.

And when you talk to the authorities about doing something in favour of dialogue, what do they say?

Many people in Europe speak of ‘deradicalization’ as a system to deal with this phenomenon of Daesh and other groups, to which I do not give much credit. It takes a lot of work, mentalities and all the actors must work in the same direction. From the family, society, school, political parties, the media and the academic world … we should all pull together in the same direction. We face human beings and we must address them in their entirety: (taking into account the) material, psychic and intellectual (aspects).

What would you say to an extremist, be it Islamophobic or fundamentalist Islamist, if you had one in front of you?

I would tell him: “I’m like you. I’m a human being like you, you should not hate me or kill me, because killing me is like killing yourself, and by hating me, you hate yourself. We need each other, we won’t be able to continue living on this planet if we try to reject each other, the only alternative we have is to respect each other and work together”.